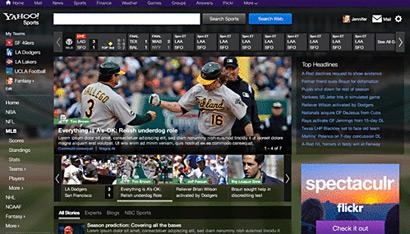 Yahoo on Tuesday rolled out several key properties remodeled in the style of its redesigned home page that feature an infinite-scrolling news feed and in-stream ad units.

Yahoo’s Stream Ads, introduced in April, now appear across these sites as well as in Yahoo Mail on the desktop and within the Mail app for Android. The ads show up at the top of a user’s inbox and are labeled as sponsored content.

In addition to the native ad format, Yahoo is also extending its billboard unit across the revamped properties for high-impact brand campaigns, movie trailers and the like. One such ad running at the top of the Yahoo Sports page today, for instance, promotes the Samsung Galaxy 4 smartphone complete with an auto-play video and link to Samsung’s Facebook page for the Galaxy line.

The updated sites all have a slicker look and feel, with text and content modules overlaid on full-screen background images. The Yahoo Sports overhaul includes headlines from content partner NBC Sports in the right column alongside the central feed as well as a refresh of its popular Fantasy sports site.

The new Movies site prominently features a section for screening films by title or theater to make it easier to find showtimes while screens for viewing trailers, clips and photos across the entertainment properties are now larger and offer high-res imagery.

Yahoo Games promises to make it easier to find popular games through an infinite-scrolling stream of titles (instead of news updates), along with an area for classic games and improved tracking of game play history to help users pick up where they left off.

Yahoo said U.S. users will start to see the changes going live over the next few days. “Stay tuned for more in the coming months as we continue to focus on advertising formats that complement our products and content, all while enhancing the user experience,” the company said in a statement announcing the site upgrades.

The latest moves reflect CEO Marissa Mayer’s stated goal of focusing on about a dozen core properties for revamping as part of the company’s broader turnaround effort. But so far, the redesign of the Yahoo home page, Yahoo Mail and other key content assets have not helped boost ad revenue. The company’s display ad sales in the second quarter fell 12% from a year ago, and revenue overall dropped 7% to $1.14 billion.

Yahoo said earlier this year that changes made to improve the user experience in Mail had led to a near-term decrease in ad revenue from that source. With the expansion of Stream Ads to Mail, it likely hopes to restore ad sales on that front, as well as benefiting from the spread of Stream Ads across its other high-traffic sites.

Asked about when Yahoo Finance might also get a refresh, a Yahoo spokesperson declined to offer any timetable, but indicated that more changes were in the works.