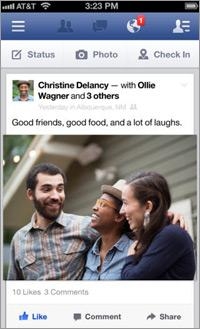 Facebook’s share of mobile Internet ad revenues is expected to roughly triple to 15.8% in 2013 from 5.3% a year ago as the social network continues to ramp up advertising on mobile devices. That estimate from a new eMarketer report marks an increase from a prior forecast that Facebook's share would reach 12.9% this year.

The company recently reported that mobile ad revenue accounted for 41% of its total ad revenue in the second quarter, up from almost nothing at that start of 2012. It also disclosed that the number of people accessing Facebook monthly via mobile had risen to 819 million, suggesting that its mobile ad sales will continue to grow.

Despite Facebook’s mobile surge, eMarketer projects that Google will remain the dominant player in mobile advertising globally, although its share will remain relatively flat from a year ago, at 53%. Wider adoption of mobile search and expanded mobile monetization of YouTube will help the company hold onto the top spot.

eMarketer forecasts the overall mobile ad market worldwide will grow 89% to $16.6 billion in 2013. The Interactive Advertising Bureau has estimated that global mobile ad sales reached $8.9 billion last year, up 82.8% from $5.3 billion in 2011.

Looking at the broader digital ad market, eMarketer projects that Google will be the leading force as it is in mobile, collecting nearly one in three digital ad dollars spent this year. Facebook will again be a distant second at 5.4%, although its share will be up from 4.1% in 2012. No such luck for Yahoo -- which will see its share slip from 3.37% to just under 3%, while Microsoft will be flat at about 2.5%.

In dollar terms, Google’s net digital ad revenue is forecast at $38.6 billion, up from $32.7 last year. As a result of its strong second quarter, Facebook’s estimate has been revised upward to $6.4 billion (from $5.9 billion), compared to $4.3 billion in 2012. Yahoo’s digital revenue is projected to reach $3.5 billion, roughly flat with last year. Microsoft’s total, meanwhile, was revised up to $2.9 billion from $2.08 billion, marking a modest rise from $2.56 billion last year.

eMarketer's digital ad estimates include advertising that appears on desktop and laptop computers, as well as mobile phones and tablets. It also spans all types of advertising on those platforms and reflects net ad revenues after companies pay fees to partner sites.