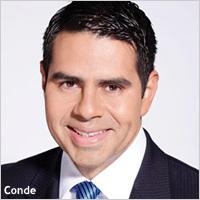 Amid a senior executive shakeup at the leading Spanish-language TV network, Univision’s Cesar Conde is moving to NBCUniversal.

A 10-year Univision executive, Conde -- who had been president of Univision Networks since 2009 -- will now be executive vice president reporting to Steve Burke, chief executive officer of NBCUniversal.

Conde will focus on business development, strategic priorities and special business projects. In addition, he will have NBCUniversal’s international business under his purview.

Burke stated about Conde: “His experience leading multiple domestic and international businesses will be instrumental in maximizing all the opportunities to grow our portfolio."

Prior to Univision, Conde served as the White House Fellow for Secretary of State Colin L. Powell from 2002–2003.