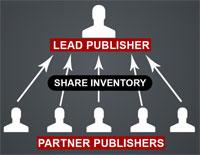 In an ironic twist in the rapidly evolving programmatic audience-buying marketplace, publishers are poised to start pooling their unsold audience impressions into consortia that compete for advertising market share with online ad networks and portals. The move is ironic because ad networks were the pioneers that helped establish the modern day exchange-based display advertising marketplace by re-aggregating the unsold audience impressions of online publishers.

But in a new platform being unveiled today, supply-side platform (SSP) PubMatic hopes to bring the marketplace full-circle, enabling publishers to organize their own, ad-hoc ad networks to compete with third-party ad nets. The platform, dubbed PubConnect, effectively is a new kind of audience exchange enabling publishers to take control of their own audience aggregation, and to create new value by pooling it with others to build reach or targeted efficiency against desirable audience segments.

To avoid confusion with conventional ad nets, PubMatic is calling the new networks “private premium advertising channels,” but they essentially work just like those created by third-parties, except that the publishers control -- and profit directly from -- them. The program is still in beta, and participating publishers could not be discerned at presstime. However, PubConnect can work in a variety of ways based on how the participating publishers set their terms with each other.

The publisher-led networks and/or consortia can either operate via private exchanges or open exchange-based marketplaces, depending on the strategy set by the participating publishers.

One of the more innovative aspects of the new platform is the ability to facilitate “cross-exchange buying,” according to Larry Harris, CMO of PubMatic, explaining, “With cross-exchange buying,  publishers won't have to be  legal partners to buy and sell from each other’s exchanges.”

He offers a “crude example,” a scenario in which, “Meredith and Time Inc. are not partners -- and neither would want to play second fiddle to the other in a partnership -- but there may be audience segments or locations  or a vertical that one sells better than the other.”

In that scenario, he says there is, “no reason Meredith shouldn't dip into Time Inc.'s unsold ‘moms over 45’ inventory and sell  it for [revenue] share or commission if they feel they are better able to do so.”

Or, in another example, he suggests, “ The New York Times could let local New York City area bloggers leverage their exchange  and audience segments to monetize.”

The reason such relationships can come together on neutral ground, says Harris, is “no lead horse is needed and no consortium needs to be formed.  All you need really is an API and a billing system.