About a year and a half ago, St. Petersburg, FL-based digital media company Catalina bought mobile commerce company Modiv Media. Since then, Catalina has created an m-commerce app featuring real-time coupon offers for grocery shoppers.

Personally, I find the utilization of ad tech in grocery stores to be one of the most interesting things. Over the summer, I spoke with Benjamin Christie, founder and president of Gourmet Ads, a food advertising network with their own online exchange. In speaking with Christie, the idea of an ad exchange of grocery stores popped into my head.

In reality, the physical grocery store is the exchange, and ad tech like Catalina is tapping into the available inventory -- the shopper's phone screens -- to serve ads, or in this case, coupons, in real-time.

I recently spoke with Patrick Moorhead, Catalina's VP of mobile brand development, about the company's m-commerce offering. He told me that the company has an app available for Stop & Shop, a northeastern U.S. grocery store chain. Essentially, Stop & Shop shoppers log in with their member ID number and scan items they are purchasing with their phone. The shoppers are then offered coupons based on what they are buying.

"Where the real-time comes into play…is that we can now have visibility because the app is linked to the frequent shopper card. We now have insights into individual purchasing habits," Moorhead said. "The shopper buys breakfast, but maybe no Kellogg's. So our business model is going to Kellogg's and saying, 'You should target this person.'"

And that targeting happens in real-time.

"It's essentially an in-store ad server," Moorhead noted. "When we see that scan behavior…we [can] set it up to give an ad for cheese after anyone buys bread." 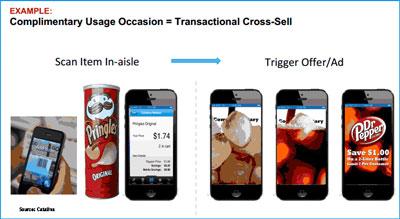 I have no idea what "complimentary usage occasion = transactional cross-sell" actually means (and the only reason I included it in the picture was to point out the jargon), but I take it to mean that Dr. Pepper (or any brand) can set it up so that their ad is shown anytime someone scans Pringles (or anything else). And, as Moorhead pointed out, the data on each individual is accurate and relevant because Catalina's app is linked to frequent shopper cards.

According to Catalina, mobile shoppers spend 40% more money each trip to the store. I asked Moorhead why this is, and while he didn't know for sure, he was willing to offer his opinion.

"When you're shopping with the app, you get a real-time readout of exactly how many dollars and cents are in your basket. You don't usually have that when you shop," he reasoned. "They can [also] see how much value they are getting along the way by serving in [the] coupon offers. That's influencing their behavior."

While it seems backwards -- wouldn't seeing how much "value" you are getting along the way cause you to spend less, not 40% more? -- I think Moorhead has a point. If you can see that you saved $0.50 on that ice cream, and $1.50 on that chicken, you're going to feel like you are getting deals because, well, you are. (At least on the individual purchases.)

"I think one thing is for certain: The research clearly indicates that the consumers want it," he claimed. "It's a new magical way of doing this old boring chore."

Catalina's m-commerce offering is currently only in Stop & Shop, but Moorhead shared that a few other locations are in the works.