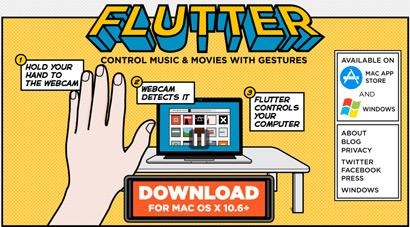 Microsoft Kinect made gesture recognition, motion sensing, and hand controls popular. Now Google has acquired Flutter, which offers a Mac application that turns the webcam into a remote control system for navigating applications. Marketers will need to begin preparing for voice and gesture-based intent signals. I've been ringing the bell for years. Algorithms are about to change again.

Wave a hand in front of the webcam to control play or pause, while a thumb to the left or right skips backward or forward. In the Mac App Store, Flutter describes itself as "Kinect for OS X." Early efforts focused on allowing users to control music programs iTunes, Spotify, and Pandora, but the app also controls programs like Chrome, and YouTube. Marketers will likely find the app built into Google's line of Chromebook hardware and Motorola handsets.

Sentiment on Facebook varied. Some comments congratulated the small team of entrepreneurs, while others thought the technology would get lost in a big company's dream to eliminate any barriers between automation and hardware.

Jarrod Cecil, a photographer in Marietta, Ga., wrote: "Sucks that Google will probably just bury this like most of the other software that they buy. Sad guys. I can't blame you though. Take the money while you can!"

Cecil is likely correct. Google will probably build the technology into hardware and applications. It opens the door to the next phase in ad serving, search and search engine marketing. Similar to voice search, marketers will need to figure out how to convert gestures into intent. The future of ad serving will likely incorporate attribution paths, voice inflection, gestures, and actions.