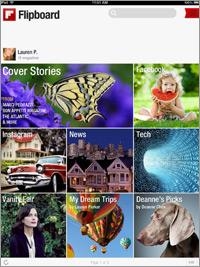 Flipboard CEO McCue spoke to Online Media Daily about how the company is monetizing that user base, how brands and individuals are using Flipboard, and what it plans to do with its latest round of financing. Here are some of the takeaways from the interview.

Of those that look at brand magazines, about 10% end up subscribing, or adding a title to the set of tiles appearing on a user’s Flipboard home screen.

The magazines from major consumer brands are just a tiny subset of the more than 3.5 million customized titles created for public consumption since Flipboard began allowing anyone to publish their own magazines with the app update launched in March.

Advertising: Flipboard offers full-page ads on a share-of-mind basis of up to 25% for a given publication in the app, or four advertisers per publication. In effect, users see ads about every 10 pages overall, according to McCue. Publishers can sell those ads directly or through Flipboard. Brands with customized magazines are increasingly using these ads to drive traffic to their Flipboard titles, much as many advertisers on Facebook try to steer users toward their brand pages.

Inventory: Paid advertising only appears within pages of formal publishing partners like Vanity Fair, ESPN and The Daily Beast.

Pricing: Because of the magazine-like experience, McCue said full-page ads on Flipboard (on smartphones and tablets) can sell for the equivalent of print ads instead of much lower digital rates. “So we’re able to monetize this content at 10 to 100 times what’s normally done on banner ads,” he said.

Audience: Evenly split by gender, across age groups, skewing more affluent and tech-savvy than average. Flipboard launched on the iPad, but users are now also divided roughly evenly between Android and iOS because of the rapid spread of the Google platform globally.

Ad interaction: Click (or tap)-through rates average about 3% across phone and tablet.

A Flipboard-commissioned study last month by Nielsen comparing brand metrics for advertising in the app with the same ad content in other media showed it had higher brand recall and favorability -- 80% and 70%, respectively -- than on TV, the desktop Web and radio.

Session length: Averages about 15 minutes. Activity tends to spike in evenings, mornings and weekends. Evening use is more tablet-focused. Flipboard in July also introduced a Web-based version to boost usage during workday hours. Within brand magazines, users typically flip through 20-40 pages per session.

E-commerce: Only the brand magazines of Levi’s and crafts seller etsy are e-commerce-enabled. A user can press a “Buy Now” button beneath an item to be taken to a company’s site to purchase the product displayed. More brand magazines will be e-commerce-powered as the holiday season approaches.

What’s next: With its new funding, Flipboard plans to ramp up hiring of ad sales and engineering staff, accelerate product development, expand into more countries, and build out its Palo Alto, Calif. headquarters and offices in New York and Beijing.

IPO: McCue said Flipboard -- with a total of $111 million raised to date -- plans to file for a public offering “over the long haul,” but suggested it wasn’t a move the company would make in the next year.