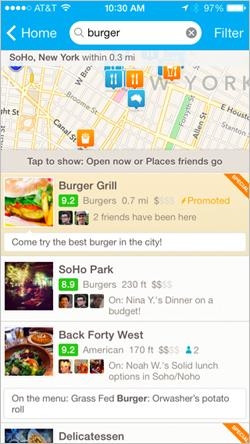 Foursquare on Monday said it is expanding its self-serve ad platform to all small businesses worldwide. The step comes about three months after the company opened up Foursquare Ads to a few thousand businesses following an initial test of the service with select venues in New York City.

The promoted listings appear in users’ feeds or in relevant search results using the Explore feature in the Foursquare app. Companies can target ads based on whether someone is near their business, searching for something related, or has checked into similar places.

Foursquare today noted that any merchant can also use its dashboard to see how many people have viewed or tapped on their ad and how many of those people actually came into their store afterward.

“We built this to be simple and flexible, learning from our four years of data and relationships with over 1.5 million claimed businesses,” stated a Foursquare blog post today. The company also posted testimonials from businesses that have used Foursquare Ads to date, including Barcade, Bronx Beer Hall and Sky Room.

When Foursquare Ads were formally launched in July, the company at the time said the format would be available to a smaller set of businesses in the U.K., Turkey, Brazil and Russia. The Foursquare site lists 56 countries where it offers service including China, Germany, Japan, Mexico and Indonesia.

Foursquare overall has 40 million users worldwide. With its ramp-up of advertising this year, the company is expected to increase revenue well beyond the $2 million in sales in 2012. A Fast Company article this summer indicated that Foursquare was on track to bring in $15 to $20 million in 2013, based on information from one of its investors.