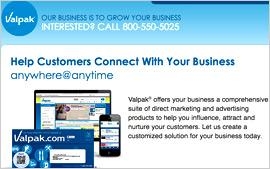 Coupon distributor Valpak is using augmented reality to make it easier to find coupons for restaurants and services -- or maybe that should be the other way around.

Consumers who download the latest version of Valpak’s digital coupon app can now tap the AR feature and hold up their smartphone or tablet to the horizon to see which local businesses have Valpak coupons they can redeem. Businesses with coupons on offer pop up with identifying information that allows the user to interact with the business in real time.

Michael Vivio, president of Valpak owner Cox Target Media, noted that the app gives advertisers the option of “attracting nearby customers at the same time they're ready to make a purchase.” The AR coupon service, developed for Valpak by WillowTree Apps, is available for both iOS and Android platforms.

Coupon and circular distributors have been bolstering their digital media and targeting capabilities in recent months.

In September, Gannett’s Shoplocal, which publishes print and digital circulars, partnered with Eyeview to create digital circular ads with video, called V-circular, which allow retailers and national brands to target consumers at the local level with promotions, discounts and special offers in video format, based on demographic, behavioral and geographic data, as well as real-time local conditions like weather.

And in April, Valassis unveiled new ad-targeting capabilities with a service called Geo-Commerce Retail Zone, which uses over 100,000 local targeting zones created by Valassis to reach prospective consumers on their way to retail.

The Geo-Commerce Retail Zones overlay the trading areas of local stores with transactional data, behavioral data and data from larger retail trade areas to pinpoint areas where relevant advertising can be delivered to high-potential consumers via mobile devices and other advertising channels.