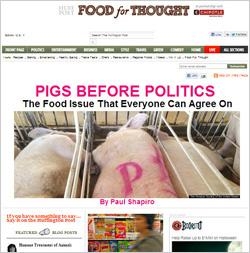 In its latest effort to get consumers thinking about and discussing where their food comes from, Chipotle on Monday launched a dedicated sponsored-content area on The Huffington Post site dubbed "Food for Thought."

An explanatory box on the area's home page states: "Launched in partnership with Chipotle, Food For Thought is dedicated to creating awareness about how food is grown, raised, and prepared and the effects this system has on us. The section will explore everything from GMOs and food legislation to tips for finding local food sources and picking seasonal produce. To be featured, please email foodforthought@huffingtonpost.com."

The platform offers numerous, frequently updated blog posts from outside contributors -- currently including, for example, Paul Shapiro, VP of farm animal protection for the U.S. Humane Society, and Frances Moore Lappe, author of "Diet for a Small Planet." It also includes relevant news articles written by HuffPo reporters and other news sources, such as Associated Press and The Washington Post -- and Chipotle's own content.

Each story page includes a box at the top of the copy showing the Food for Thought section logo, followed by: "in partnership with Chipotle." All posts include social sharing links and links to comments, and Chipotle is using its own social assets to drive fans to check out Food for Thought and engage in the conversation.

Chipotle has say over its own content and the topics, but is intentionally incorporating "a lot of different voices," CMO Mark Crumpacker told Bloomberg Businessweek.

At present, however, while the articles from news sources present both sides of debates on topics like GMO labeling, there doesn't seem to be any sign of opinion pieces defending the processes or ingredients used by mainstream food makers, which Chipotle collectively labels "processed" foods.

“The reality is we have a opinion on this, and we know what we want to say,” Crumpacker told Businessweek. "People can disagree, but the more they talk about it, the more they’ll think about their food.”

Driving conversation that increases awareness of food origins and ingredients is, of course, Chipotle's core marketing strategy, since its brand promise is all about "Food with Integrity" -- meaning offering food using organic, locally produced ingredients and meat from "naturally-raised" animals wherever possible.

"The more people learn about where their food comes from and how it is prepared, the more likely they are to seek out high-quality, classically prepared food like we serve in our restaurants,” Crumpacker summed up in describing the point of Chipotle's blockbuster three-minute video, "The Scarecrow," and its accompanying iOS game.

That video, although criticized by more than a few as unfairly and inaccurately portraying the practices of mainstream food makers and suppliers, has certainly achieved Chipotle's goals: Posted on Sept. 11, it's currently showing nearly 7.2 million views on YouTube.