85% Of Advertisers, 72% Of Publishers Using Programmatic

Publishers are behind advertisers in their adoption of the tech, but a full 72% say they are using a programmatic approach to selling, with 83% saying they expect to within two years.

The data comes from the Winterberry Group in conjunction with IAB in a white paper titled "Programmatic Everywhere? Data, Technology and the Future of Audience Engagement." Over 250 advertising executives were surveyed for the report.

Even though a high percentage of both buyers and sellers are using programmatic, they seem to be doing so for different reasons. The majority of advertisers 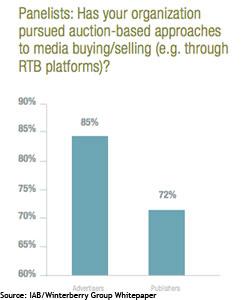 Programmatic is being used most often for audience segmentation (79% of respondents say so) and auction-based media trading (79%). Insight development (63%), automating back-end processes (59%), automating "premium" digital media trades (59%), and content optimization (47%) are the other areas in which programmatic is being applied the most. Just 22% of respondents say they are using programmatic to automate traditional media buying processes, such as print advertising. Respondents expect every one of these figures to rise within two years.

“The rise of programmatic buying and the inherent operational efficiencies it promises offers a positive sea change for the entire digital industry,” stated Patrick Dolan, executive vice president and chief operating officer, IAB. “But, if we’re going to take full advantage of [programmatic] buying’s potential, it is incumbent upon the industry to overcome barriers to its success."

One of those barriers to success might be a definition. The panelists were asked to select three terms that describe "programmatic" to them. "Automation" was the leader at 68%, with "real-time bidding" (RTB) close behind at 66%. "Auction system for buying advertising" (47%), "audience targeting" (39%), efficiency/lower costs" (37%), and "data" (24%) were the next most chosen terms.

"Non-guaranteed," "remnant," and "secondary" inventory were used to describe programmatic by 20%, 11%, and 9% of respondents, respectively.

Near the bottom of the list, 4% described programmatic as "cheap," while 3% defined it as "confusing."

The whitepaper notes that "whatever you call it, it’s clear that a consensus definition is needed if the practice is to evolve from a common foundation."

The survey asked the panelists: "Which pain points, if any, are inhibiting your organization's adoption of programmatic approaches today?" One-third (33%) of advertisers said brand safety issues, and 24% cited a lack of transparency; those were the two most pressing issues for advertisers. Data governance is the least inhibiting "pain point" for advertisers, with only 9% saying it has curbed their programmatic approach.

Brand safety was the number one issue on the publisher's side too, with 26% saying it has inhibited their adoption of programmatic. The same number (26%) cited a resistance from current process owners.

One supply-side platform (SSP) executive is quoted in the whitepaper as saying, "[T]he industry needs to be integrated rather than waging a war between the nerds and the cool kids. Art and science together makes this work. No one should talk badly about the other side — or work against their objectives."