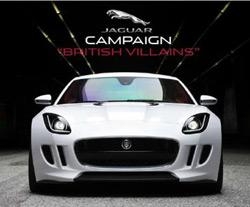 The cat is the villain in Jaguar’s first-ever Super Bowl ad. The automaker, which has hitherto had a limited TV spend, is making the campaign a harbinger of bigger things to come as the Land Rover sibling moves to grab more territory in the U.S. automotive market veldt. The ad with a "British Villains" theme that spotlights the forthcoming F-Type Coupe, will air during the second half of the game, per Jeff Curry, brand VP at the Mahwah, N.J.-based Jaguar U.S.A.

“It's the most popular sport in the U.S.; and the Super Bowl  transcends the media marketplace. Conversations happen long after online, with Tweets and Facebook quotes. The Super Bowl is the advertising bowl, so it's a great place to bring Jaguar to life,” said Curry.

The spot, "Rendezvous," features a trio of famous British actors -- no word on who they are yet -- and was filmed by Academy Award-winning director Tom Hooper, who helmed "The King's Speech," among others. The campaign theme line asks, rhetorically, whether you have noticed how in the Hollywood movies all the villains are played by Brits. The effort includes a social element around the hashtag #goodtobebad, linking to the overall allure of the F-Type and villains of the British variety.

Bruce Dundore, creative director of Jaguar's AOR, Spark44, said the idea of using British villains as a metaphor for the car arose from conversations with film directors. He said that while the company was mulling creative ideas he spoke with a British film director who said the most fun character to write is the villain “because he defines the journey of the hero, the story line; the villain is cunning, sexy, seductive, stylish, calm and calculating. These elements are perfect for car like this.”

The company is doing a villain-themed edit of an ad that is in rotation now. The teaser, which will air Sunday, makes it appear as if a bad guy had taken over the ad. You suddenly see his face in shadow on a grainy reel. He hints about the campaign to come. "We have been increasing our investment in TV over the past year," says Curry. "It is key right now."

The automaker, which inked a deal earlier this month to be a sponsor of the British Academy of Film and Television Arts, will activate on the relationship this weekend when the awards organization holds the Britannica Awards celebrating the best British film, actors and directors, and honoring Ben Kingsley.