Lift Me, Touch Me, Scan Me, Buy Me 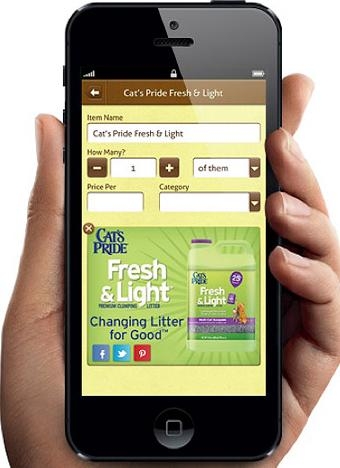 “That is so smart,” my wife says in response to a recent brand campaign for a less weighty litter. On-air promotions usually have little impact on her. But this one was so well targeted to a core concern, it made her wonder why a manufacturer hadn't thought of making a lighter litter years ago. “That is speaking directly to women.” Well -- women like my wife, who when I met her had over ten cats roaming in and around her house. Yeah, ten. Some second marriages involve pre-nups. Ours involved cat negotiations. How many, where housed, etc. I am not even a cat person. Two marriages involving two wives and a daughter -- all of whom have foisted cats on me. At 55, I am still waiting for my first dog.

For the uninitiated, cat litter is unnaturally heavy. The boxes and bins in which it comes can dislocate an arm when lifted, partly because you don't expect such heft in small packages. On the periodic table, I think Litter should be a unique element with its own atomic weight. Joke all you want about eccentric and lonely “cat ladies.” Don't mock them to their faces because the odds are the litter lifting over the years has left them with shoulder and arm muscles that could easily take you down.

So a lighter litter was big news in my house. If we could just remember who the heck made it. If -- like my wife and I -- you had vague memories of a lighter litter advertised somewhere, your first instinct is to see if you can eyeball it in the pet aisle. As a longtime cat owner, who has had arm sockets wrenched by picking up tubs of cement-grade litter, your instinct is to try this for yourself.

It is precisely this vague relationship between mass brand advertising and the in-store experience that mobile can help bridge. The device can be leveraged to reinforce and make more specific these cloudy brand messages we pick up elsewhere and help focus them at the point of sale. In fact, it turns out that Cat's Pride is the brand behind this lighter litter, and its agency Doner seemed to understand that it was a product that actually needed to be handled. And so it worked with the maker of the CheckPoints shopper rewards app InMarket to get the Cat's Pride Fresh & Light product into the flow of its users' shopping ritual. InMarket tries to engage different types of shoppers (loyalty enthusiasts, list makers, deal hunters) with a suite of apps that target a range of shopper types and behaviors including CheckPoints, List Ease and Extra! Extra!

CheckPoints is the legacy app that rewards shoppers with redeemable points for scanning products in-store. The theory is that having a product in hand gets it that much closer to the cart and engages the consumer with the item in a very convincing way. Todd DiPaola, co-founder, president, InMarket, says: “From our research, this can lift purchase intent 300% when they are in the store holding it in their hand.” The typical engagement with the product when a user lists and scans it is 90 seconds, he says.

Actually holding the Cat's Pride lighter litter in one's hand was in this case the best-selling proposition. Weight itself was core to the product. Bob Tacy -- SVP, director of digital media, Doner, the agency of record for the brand -- tells me that the product has already been widely advertised since April. “But this was one way to get the brand in front of the consumer. When they typed in ‘cat litter’ Cat's Pride comes up as an option with a small banner and the option to populate it into the shopping list.” They get points simply for lifting and scanning the product. “It was a way to reinforce the brand attribute,” he says. After the scan, a user can get a 30-second video reinforcing the product attributes.

The InMarket shopping app execution was just part of a broader cross-platform campaign. Doner’s Angela Lewis, digital media supervisor, says: “We also had mobile video advertising and geo-targeted banners around where the product was available.” There were multiple KPIs set up for measuring the performance of the mobile campaign, including use of store locators and coupon downloads. For the InMarket app, they did post-campaign research “and saw 400% lift in purchase intent and 39% lift in brand awareness,” says Tacy. He admits that working within a specific app limits scale for this particular tactic, but the app was able to render analytics to show the number of people engaging with the product, who added it to shopping lists and the number of scans. “It motivated thousands of people to interact with the brand,” he says.

It also underscores one of the ways that mobile bridges the realm of brand advertising with the point of decision. If other consumers were anything like my wife and I, they had an unfocused memory of some lighter litter that lodged in their consciousness from some other media source. And because we consumers really are not hanging on advertisers’ every word (you get that, don't you?) none of us is running to the market with any specific cat litter brand top of mind.

In the CPG realm especially, the path to purchase is wide and meandering. It is hard to tell which message will register with any specific consumer at any given time and through which channel. Reach and frequency are still essentials in establishing some higher level of recognition in consumers. Coupons traditionally have been an effective bridge from broad awareness to purchase intent. And of course, in-store signage and end-capping are ways of teasing back a consumer's memories of product they have seen mentioned elsewhere. But these are opportunistic approaches. Mobile has the ability to get into the flow of a task -- a behavior. In this case it even prompts a lift-and-feel action that bridges the conceptual with a physical behavior that literally brings a product halfway to the cart.

For me and my wife, a lighter litter is fine as a short-term solution. I am in search of bulk litter delivery services, perhaps to a dedicated silo with a pour chute into the house much like coal in 19th-century urban London. We have agreed to let natural attrition reduce the headcount, but I am not sure I have a full and fair accounting. I keep eying unfamiliar tails. “Who is that?” I find myself asking as an unfamiliar feline scurries from the porch when I open the door. “That is Emily,” my wife assures me. Seven years into our relationship and I still don't know my wife's cats' names. She plays it, and I have suspected all along I am being punked. She claims we are down to six cats now, but I am pretty sure there are more and I don't know them well enough to count.

“She is not ours. She just comes to visit the cats and eat their food.”

Good thing we don't have a “CEEment pond” because I think I married Elly May Clampett.