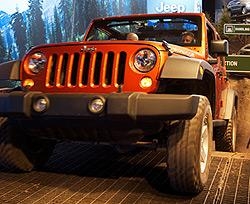 Camp Jeep turned 10 this month. The program, encompassing ride-and-drive experiential events at an assortment of auto shows, concerts and other big happenings, is the Chrysler unit's way of getting people to test out the Wrangler and other cars in its lineup without going to the Rubicon Trail.

The grass roots experience, which two weeks ago in Miami garnered its millionth consumer test drive, differs from what others do in at least one regard: it's both horizontal and vertical, and bumpy: The display, which varies in size and can leave a footprint as large as 45,000 square feet, includes a drive course with a roller-coaster-steep hill that joins a suspension twisting faux trail. The space hosts concerts, and includes lifestyle elements, licensed merchandise and a “Jeep Kidz.”

John Tulloch, SVP of event firm George P. Johnson (GPJ), which developed and runs the program, tells Marketing Daily that Camp Jeep became a bona fide event-marketing effort after having for years been a loyalty platform for clubs and owner gatherings around the country. He says that a decade ago GPJ pitched Chrysler with the idea of taking a version of the grassroots program to big consumer events like auto shows. “We went to Jeep and said we think we can do it in New York, which is Jeep's strongest region.” He said it took two years to develop that platform before taking over the North Pavilion of the Javits Center during the New York Auto Show in 2004.

GPJ will do some 16 shows in 20 cities next year, per Tulloch, who said Camp Jeep events come in various shapes and sizes to fit the scale of shows -- auto or otherwise -- hosting them.

There are still loyalty events, such as the 30 or so multi-day Jeep Jamboree outdoor happenings, at which Jeep owners converge to camp, drive off road, buy gear, learn Jeep technical ins and outs, hear live music, and engage in various outdoor challenges and hang out.

The biggest show for Camp Jeep, he says, is the Chicago Auto Show, the largest North American auto show both in terms of square footage and attendee size, with over a million people visiting. He says at this year's show Jeep brought in about people 20,000 over nine days.

Camp Jeep has also expanded to global markets including Germany, China, and Mexico, with plans to bring the camp to Japan, Korea and India. “With Jeep being a truly global brand selling in over 125 countries, launching new products and being an iconic brand, it makes sense. In markets like China, people love big, iconic American brands.”

He says exit surveys show most participants are within 12 months of purchase. “It's a bit more lower funnel, so our job is to make sure they experience Jeep.”