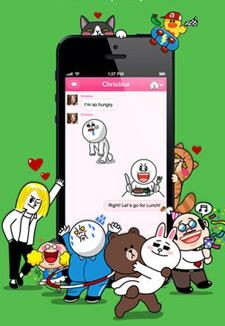 Japan-based messaging and free calling app Line on Monday announced it had surpassed 300 million registered users worldwide. Launched in June 2011, the service has grown quickly in East Asia and other markets by letting users post digital stickers in messages to friends.

Globally, Line competes with popular messaging apps, like WeChat in China and WhatsApp and Kik in the U.S. From its base in countries like Japan, Thailand and Indonesia, the company says it’s now gaining a foothold in Spanish-speaking countries like Spain and Mexico, and in Latin America.

The company is focused on gaining new users in Western Europe, Turkey, India and the U.S., where it has yet to establish a strong foothold. To that end, Line teamed with Sanrio Co. this month to launch a limited edition Hello Kitty sticker set exclusively in the U.S., hoping the cartoon cat will attract more American users.

The company has big ambitions. After reaching 100 million users in its first 19 months, it took only six months to add the next 100 million, and another four months to get to 300 million. “We’re aiming to reach 500 million users in 2014, and to develop Line into the world’s top communication service,” said Line CEO Akira Morikawa, in a statement today.

In addition to selling select premium stickers, Line makes money by charging brands, including Coca-Cola, Toyota, and McDonald’s, to operate official accounts on the service. Coke, in turn, might use its account to offer followers sponsored stickers to get 10% off their next soda purchase.

Line has a total of more than 300 official accounts, including international celebrities like Paul McCartney. Sanrio’s Hello Kitty is the first official account in the U.S.

In an interview with Online Media Daily this fall, Morikawa indicated the company has no plans to introduce third-party advertising directly into users’ timelines, home pages or around messages to preserve the user experience. He also suggested that mobile advertising rates outside the U.S. tend to be very high, making a fee-based model more practical globally.

In addition to its text messaging, video chatting and novelty stickers, Line also offers its own games, with total downloads to date surpassing 220 million. In the coming year, the company said it plans to introduce new features and enhancements as it evolves into a broader social/mobile platform.

Given the success of Twitter’s initial public offering, and the $3 billion reportedly offered by Facebook to acquire SnapChat, Line stands to benefit from the hot market for fast-growing messaging apps