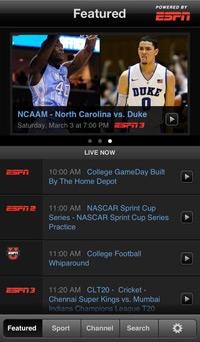 With the college football, NFL, NBA, and NHL seasons all underway in October, and the World Series in progress, ESPN saw its highest monthly digital usage total to date.

The sports network generated 8.2 billion minutes of use across PCs, smartphones and tablets, according to comScore's multiplatform data. It also had its second-highest digital audience last month, with 67.7 million unique visitors.

For the second straight month, ESPN also saw traffic to its mobile properties outpace that on the desktop -- barely, by 43.8 million people to 43.3 million. More than a third (36%) of users -- or 24.4 million people -- accessed ESPN content exclusively on smartphones and tablets, while nearly half (47%) of all time spent was on the mobile side.

During a presentation earlier this month at MediaPost's OMMA Premium conference, John Kosner, executive vice president, digital and print media at ESPN, suggested that the rough parity in desktop and mobile usage increasingly meant parity in its ad offerings as well. Marketers are now able to run its “Mega” video ad unit across both platforms, for example. He did not specify the split between desktop and mobile ad revenue.

ESPN this month released a major update of its flagship SportsCenter app for the iPhone and Android handsets, packaging live scores, breaking news, video highlights, and feature stories, among other elements. The free sports app has been downloaded more than 43 million times to date.

Looking more closely at video use, ESPN data shows the vast majority of digital users still prefer to watch on computers. Of the 346.2 million video clips viewed on ESPN platforms in October -- the second consecutive month of a record number of monthly starts -- 79% were watched on PCs, 14% on mobile devices, and 6% on connected TVs.

Furthermore, users spent 575.3 million minutes viewing WatchESPN and ESPN3 live and on-demand programing in October --  up 38% from a year ago. The streaming quality on those platforms is not always the highest, depending on the speed of a user's Internet connection, among other factors.

ESPN is also trying to capitalize on two-screen viewing. Along with sports programming from sister network ABC, it generated 8.8 million tweets last month, accounting for 10% of all TV-related Twitter activity, according to Adobe Analytics. It also ranked as the fourth “most social” TV network, with 1.4 million users sending 4.5 million tweets about ESPN content, per SocialGuide.

Among other social media factoids:

*ESPN had 24.6 million unique fans across all of its Facebook pages in October, and 25.5 followers on all ESPN Twitter accounts.

*ESPN’s Twitter accounts were retweeted or "favorited" 5.9 million times during the month.