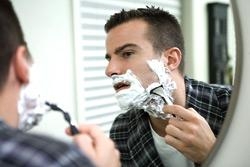 Men use deodorant, antiperspirants, shavers, shaving cream, skin care products, shampoos, and conditioners as much as everyone else (meaning women.) And the market for male personal care products has certainly grown over the past five years. But the $3.9 billion market faces some challenges.

Men's personal care -- dominated by Unilever and P&G, which own a combined 60% of the market -- grew 15% between 2008 and 2013, says Mintel in its new report on the category. Mintel says toiletry products -- antiperspirants, deodorants, shower gel, and haircare products -- have the highest market penetration, partly because people use them every day. Skincare lags, both in penetration and sales. And shaving may need a serious rethink.

Mintel says that over the next five years, category growth will continue to be driven by antiperspirants/ deodorants (the largest segment, with over 32% of the market). Shaving and body care is driving 13% growth in the category. But between that period the firm says older people will change part of the game:  there will be an 8% growth among men ages 55-64, and a 21% increase in the numbers of men aged 65-74.

"Getting them to increase their product usage could be a challenge, as they likely have simpler personal care routines," says the report. But the firm concedes that older men are also getting divorced at increased rates and starting to date again. And they are putting off retirement and working for longer and therefore competing against younger men, meaning they will try to look younger. "Companies and brands can use these experiences in marketing products to older men, positioning product use as a means to feel more confident when going on a date for the first time or interviewing for a new job," suggests the firm.

But the study also says that since loyalty gets stronger with age the market share and sales growth potential and marketing imperative is with younger people. "Many men take a functional approach to this category. Older men have likely been using the same products for years and don't feel the need to try out new products or brands,” says the firm.  “[But] Younger men may be more open to trying out new brands, and it is crucial for men's personal care companies to capture their loyalty at a young age, as it will become more difficult to get them to switch brands as they age."

One of the weaker categories -- although it's the second-largest with 31% of the market -- is shaving. These products, whose sales numbers have declined 1% since 2011, face strong pushback from generic and store brands and changes in social norms and behavior. In the latter case facial hair is more acceptable in social and professional situations, and younger people, those between 25 and 34 years of age, are less and less apt to shave regularly. "Shaving product brands should explore creating a subbrand of facial hair products that are designed for maintaining and improving the appearance of facial hair, rather than simply eliminating it," says Mintel.

But there is an opportunity for this segment from two places: younger men aged 18-34 are much more likely than older men to report that they use skincare products such as facial cleansers and moisturizers. And the growing Hispanic and black population also index strongly for these products. Mintel sees the Hispanic population growing by nearly 14% and the black male population by 7% through 2018.