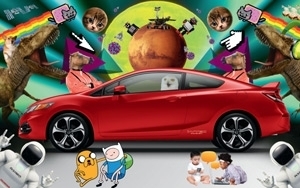 Honda is putting major focus on small cars and new media strategies this year. The automaker just launched a new campaign for the Civic Coupe and Si Coupe for the 2014 model year. The effort -- which had a strong digital footprint with unique programs on Spotify, among other things -- is also the first work by new media agency MediaVest. RPA still handles chief creative duties on the Honda brand.

Ed Beadle, national manager for Honda and Acura media strategy, tells Marketing Daily that the new campaign is the first fully integrated effort for the brand since the automaker did a major agency diversification that involved both Honda and Acura brands. “The insight was from the Gen Y target,” he said of the campaign. “Individuality, mobility and connection to the social universe. When we dug into insights, music was a huge component.”

He says the campaign, with its new approaches to music and social media, is the fruit of Honda’s 70-20-10 media strategy: 70% of budget devoted to building sales, consideration and brand awareness (all of the budget used to go to that); 20% toward marketing on new media that may not yet have strong ROI indicators; and 10% for what might be the marketing version of angel investing, where money is spent against avant garde media programs and seeing if something sticks. “Comedians in Cars Drinking Coffee,” of which Acura is a sponsor, might never have happened without that approach.

The music scrapbook program with Spotify, he says, “had never been done. But this delivered on our strategic objectives of engagement with mobile experience and connecting to social platforms.”

Tom Peyton, assistant VP of national advertising for Honda, tells Marketing Daily that the campaign also directly ties back to last year’s Innovation campaign. “The intent was to build on that, but make it even more fun, youthful and optimistic than that [original] work was. It’s big on innovation and cool factor.”

So who is buying Civic? Peyton says that if you look at the data, the average buyers are in their forties and fifties, but younger people are a growing portion. “We have always had a great core of Baby Boomers buying Civic, but 21% of buyers are under 35, and we want to grow that.”

The company is also launching a total redesign of its Fit subcompact this spring. “Needless to say, that’s also a 20-something buyer, but it’s a little funkier,” says Peyton. The automaker is going to have much greater production for that car as it is being assembled at a new plant near Celaya, Guanajuato, Mexico, with capacity for 200,000 units per year. “We have had great success with Fit, but with the new plant and more volume it allows us to crank it up from a marketing perspective.”