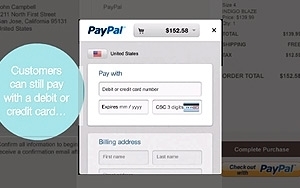 PayPal made a splash late last September with the announcement of Beacon, promising hands-free mobile payments for in-store shoppers. But the company on Monday suggested it hasn't forgotten about its existing online business, even as it pushes into the offline retail world.

In that vein, PayPal has introduced a new checkout experience for e-commerce merchants designed to streamline the process for customers. Now when people select the “pay With PayPal” option at checkout from an online store, the entire process of logging in and entering billing or other information takes place on the retailer’s site, instead of having to first go to a PayPal page.

“In addition, merchants only need to do one integration to get the same seamless checkout experience on a computer, tablet, or smartphone,” stated Don Kingsborough, VP, retail services, PayPal, in a blog post announcing the upgrade and other developments in connection with the National Retail Federation’s annual convention.

He noted PayPal is testing the updated checkout system with a few partners and will make it generally available to large online merchants in the first half of 2014, before rolling out to small and medium-sized ones. Later this year, the company will also allow customers to log into a retail site with their PayPal ID to further speed up checkout.

“If you are logged in and check out, all of your shipping, preferences and payment information is automatically populated. All you need to do is click the checkout button and you're done,” stated Kingsborough. That’s similar to the “Login and Pay with Amazon” service the online retail giant introduced in October to let people make purchases on other sites using their Amazon credentials.

PayPal also announced the expansion of Payment Code, a new capability it recently debuted that lets shoppers use a scannable QR code or four-digit short code to pay in-store via PayPal’s smartphone app. Already available at 1,500 locations in the U.K., the service will extend to many merchants using the MICROS and Discover point-of-sale (POS) systems starting in February.

Last, PayPal provided an update on the rollout of Beacon, its Bluetooth Low Energy (BLE)-powered system for physical stores that lets PayPal app uses automatically check in and pay at retail locations. Kingsborough said the company is testing Beacon at few merchant locations in the U.S. and Australia, with more soon joining the trial in the U.K., Canada, France and Germany.

The integration of Beacon into the PayPal app is expected to be completed in early 2014.