ChoiceStream on Monday released the January Cost Calendar, its monthly report of how expensive it is to buy media targeting specific audiences. The data comes from impressions traded on digital ad exchanges (programmatic buying). Note that despite being the "January calendar," the data is actually from December.

With that in mind, it’s no surprise to see that Holiday and Events: Gift Giving was the most expensive segment last month. Additionally, travel segments -- which routinely rank as some of the most expensive in the real-time bidding (RTB) marketplace -- performed well again.

It was an expensive month to target travelers for four Mediterranean destinations in particular -- Portugal, Italy, Greece, and Spain. All four ranked in the top 10 in terms of cost.

Interestingly, even though the NFL Playoffs were right around the corner and college football bowl games were in full swing, the cost of reaching college and professional football segments declined in December. Despite calling this downward trend “surprising,” ChoiceStream expects it to continue until late summer.

“With the end of 2013, ChoiceStream also closed the first full year of reporting on the relative costs of online audiences,” stated Bill Guild, VP of marketing at ChoiceStream. “This milestone enables us to focus more on cyclical trends; the holiday season was no surprise with the gift giving segment becoming more expensive.  2013 Gift Giving was even more expensive and clearly more of a priority than in November and December of 2012.”

Guild also noted that targeting toy shoppers is more expensive around back-to-school season than the holidays, which he called “somewhat unexpected.” 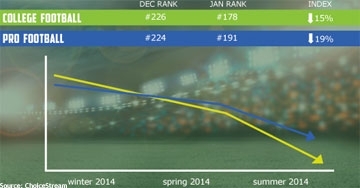