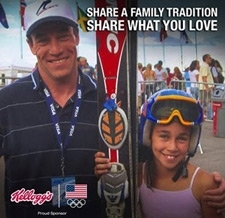 With this week's announcement that reigning world champion ski jumper Sarah Hendrickson had recovered from her knee surgery, returned to training and been officially nominated (just in time) to the first-ever Team USA women's ski jumping roster for the 2014 Socchi Olympics next month, her inspirational story is bound to heighten the already-intense in these women's events.

The day after Hendrickson's Team USA participation was confirmed on Jan. 22, Kellogg sent out a release that included that news, and outlined the thrust of Frosted Flakes' Hendrickson-focused campaign efforts.

The brand is "celebrating the father/daughter bond" through the Olympic hopeful ski jumper and her father, Bill Hendrickson – a former ski jumper who shared his love for the sport with his daughter -- and "by encouraging dads everywhere to share their passion for sports with their daughters."

The campaign's positioning and elements speak to the long planning and coordination that have gone into the myriad brand-specific and cross-brands executions for the massive Team Kellogg Olympics marketing effort.

In addition to noting that the father/daughter pair will be featured in a TV ad during the Olympic trials and Games (in which they'll talk about their shared passion for ski jumping and compare their personal records), the brand included results of a survey of young female athletes showing that fathers are the most powerful influence in creating an affinity for sports, and that "sharing sports enables more meaningful life moments" between dads and daughters. (For example, 53% of female student athletes say their dads were the single most important influence in creating their love of sports, versus 11% citing their moms, 11% their coaches, and 14% their friends).

Frosted Flakes is also encouraging fans to view a "Share What You Love" video on the Kellogg's YouTube page (posted last fall) in which Sarah relates her life/journey-to-the-Olympics story, which features both her father and mother.

The "share what you love" theme continues on social networks, where fans are being encouraged to do that by tweeting with the hashtag #sharewhatyoulove, and by following the brand on its Twitter account, @realtonytiger.  (Hendrickson tweets and photos are on view there, as well.)

Hendrickson is also working in the occasional mention of Frosted Flakes on her own Twitter account ("Mom is eating some Frosted Flakes and getting ready to cheer me on in #Sochi2014 Thanks to kelloggs...").

On its Facebook page, Frosted Flakes is promoting a link to the "Share What You Love" video, and one to Hendrickson's own Facebook page, where fans can post personal "good luck" messages. (The photo shown above, showing Sarah as a girl with her father, is from the brand's Facebook page.)

Like other Team Kellogg ambassadors, Hendrickson is being featured on her brand's packages around the Olympics, along with an Olympics-themed promotion tied to Kellogg's Family Rewards program. (Collect two Family Rewards codes found inside specially marked Kellogg's cereals, enter the codes online, and get a free, exclusive Team USA pin -- as well as a sweeps entry for a chance to win a trip for four to the U.S. Olympic Training Center in Colorado Springs.)