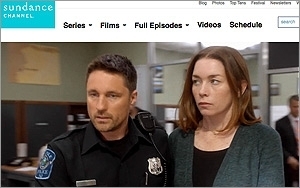 Boosting its awareness and content for more original programming, the brand makeover -- long associated with independent films -- starts Feb. 27 in conjunction with its new original series: “The Red Road.” Later in the year, the network will air “The Honorable Woman” starring Maggie Gyllenhaal.

“SundanceTV aims to create television that is as remarkable as the best independent films, and this rebrand embodies that position and confidence,” stated Monica Bloom, senior vice president of marketing for SundanceTV.

In the recent year, Sundance has boosted original programs such as “Top of the Lake,” “Rectify” and “The Returned.”

Founded by Robert Redford, Sundance Channel started in 1996 as a premium movie channel, a joint venture between Showtime Networks and Universal Studios.

SundanceTV’s new logo and on-air/online graphic update was developed in partnership with Base Design and Johnson + Wolverton.