The Super Bowl has turned into the Super Social Bowl.

That type of figure, along with some other weird stats (like tweets per second), are ones that I’ve chosen to ignore over the years. Twitter was new, and has been growing so fast, it’s been a foregone conclusion that those “records” would be broken within a year.

Some quick math tells me there was about a 1-to-4 ratio between tweets and viewers during last year’s Super Bowl. This year, we might reach that figure before the game even starts.

Crowdtap, a social marketing platform, polled 1,000 men and women on the topic of Super Bowl advertising before, during and after the game. And you guessed it -- 25% said they will likely post about Super Bowl ads on social media before before the game.

Over two-thirds (67.4%) said they will likely post about Super Bowl ads during the game. What was I saying about that 26.1 million tweets record Nielsen headlined last year again?

Including posts before, during and after the game, 61% say they will share ads on social media. That’s different than simply posting about the ads.

It's still far less than word-of-mouth; 93% of respondents said they will discuss ads with peers. But the Super Bowl has been an actual Social Bowl -- you 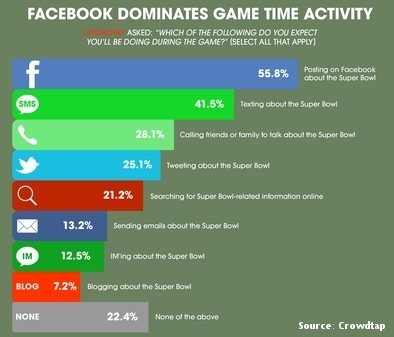 know, meaning in person -- for a while now, so that should come as no surprise. (Speaking of which, is the Monday after a national holiday yet?)

The data is interesting, but there are some results that cause me to scratch my head, like the fact that Crowdtap says fewer people (25.1%) will tweet about the Super Bowl during the game than call their friends or family during the game (28.1%).

Personally, I doubt that one. But we can’t expect a poll of 1,000 people to fully represent what tens of millions of people will be doing.

What we can take away from this survey is that there will be plenty of opportunities for marketers to engage with consumers outside of the actual TV spots, all in real-time.

We saw brands do it last year, not just at the Super Bowl but throughout the entire year. So which brands will score and which will drop the ball?

Something tells me the horde of people on social media will let us know.