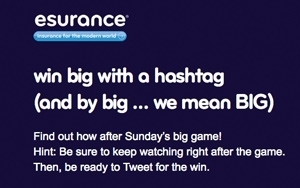 This is the first time the company has purchased national advertising associated with one of the year's biggest media events, and in keeping with their “uber-efficient approach to insurance,” Esurance purchased air time immediately following the game. The time slot provided a savings as compared to an in-game commercial.

Viewers will see messages that hint at something "really big" and urge them to start practicing their hashtag skills. The 30-second spot also is being promoted at a dedicated microsite.

"This is one of the most-watched sporting events in the world, and the fact that Esurance is on this stage for the first time speaks volumes to our positioning as a major contender in the insurance arena," said Esurance Vice President of Marketing Darren Howard in a release. "Esurance has changed the way self-directed consumers shop for and buy insurance, and we're excited to be part of a national sports event as large as this and to share something really big with consumers. We think it will be worth sticking around until the end of the game to see what we're doing."