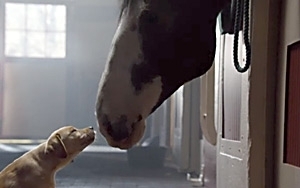 Anheuser-Busch is promoting both its Budweiser and Bud Light brands in Super Bowl spots.

The Budweiser spot, “Puppy Love,” aims to endear the brand to viewers by tugging on their heartstrings. The star of the spot is a 10-week-old Golden Labrador puppy that forges a bond with one of the beer brand’s famous Clydesdales.

Actor Don Jeanes, from last year’s Budweiser spot “Brotherhood,” is back in the role as the Budweiser Clydesdale trainer. He’s joined by actress and model Melissa Keller.

The spot was directed by Jake Scott and features the song “Let Her Go” by Passenger. The agency is New York-based Anomaly. It debuted Jan. 29 on the “Today” show.

The spots are part of a new campaign themed “The Perfect Beer for Whatever Happens.” The teasers set up an expectation for the unpredictable, says Rob McCarthy, vice president, Bud Light, Anheuser-Busch.

“Bud Light lives up to that challenge by documenting an unforgettable adventure that features five special cameos, including Arnold Schwarzenegger, Don Cheadle, and Reggie Watts (and a llama),” he says. “Our six Super Bowl ad teasers give viewers a peek behind the curtain, but fans will have to tune in during the game to see how these seemingly unrelated events form one cohesive story.”