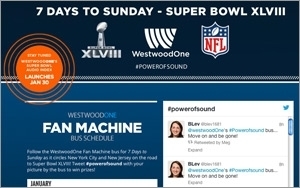 The Super Bowl is coming up, and WestwoodOne is joining forces with Horizon Media to connect with fans ahead of the big game. The weeklong program, “7 Days to Sunday,” kicked off on Monday, January 27 and is scheduled to run through Sunday, February 2, with events around New York City and the tri-state area.

One of the vehicles includes a VIP lounge and a glass-walled mobile studio (featured in the video for Maroon 5’s “Never Gonna Leave This Bed”) that allows bystanders to see inside the radio studio. Fans who visit the buses can engage with NFL personalities, sample Horizon brand products, and maybe even get on air.

NBC Sports Radio is also participating in the “7 Days to Sunday” countdown, with live sports talk programming from locations in and around New York and New Jersey, including bus reports from popular sports journalists.

While the TV broadcast (and TV ads) tend to receive the most attention, the Super Bowl also attracts a large radio audience: 23.1 million listeners tuned in to hear Super Bowl XLVI in 2012, according to Edison Research. That’s equal to just over one-fifth of that year’s TV audience of 111.3 million, the biggest on record (the 2013 game had a slightly smaller TV audience of 108.4 million, possibly due to the mid-game blackout)