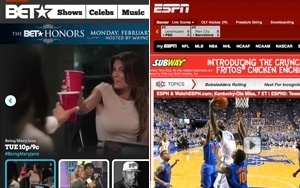 Looking at all TV network social-media activity for January, one study says that among all TV networks, BET posted some of the strongest results.

Shareablee, a social-media business research company, says when looking at all social-media activity -- likes, shares, and comments -- BET was tops for the month in January with a 4.1 million “cross platform unique engaged audience.”
This data comes from looking at activity on Facebook, Twitter and Instagram.

It was also strong in overall cross-platform “actions” -- 6.2 million. This was second to ESPN at 6.9 million. ESPN was second to BET in unique audience at 3.8 million.

Research came from 110 broadcast and cable networks. The average TV network posted an audience of 286,574 with 501,360 actions.