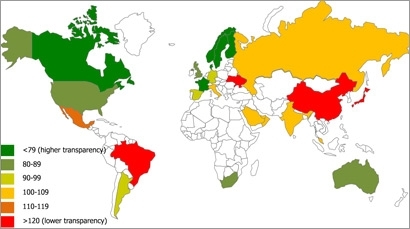 The World Federation of Advertisers has devised what it says is the first Global Media Transparency Index. The index provides scores to the top 20 markets, based on buying practices and the relative ease or difficulty of deciphering how media rebates are applied to media purchases.

Currently, France is top-ranked in terms of transparency and openness about how its buying rebate policies work. At the other end of the scale, China, Japan and the Ukraine have been deemed “opaque,” with virtually no insight or effort to divulge the specifics of rebate practices.

In a blog post on the new index, which the group devised with the help of Ebiquity and Telemetry, China is cited as the least transparent media buying market and a region where agencies and other entities engage in a great deal of media arbitrage -- the practice of buying ads at market rates and then reselling packages at higher prices to advertisers.

“It shouldn’t come as a surprise that ‘arbitrage’ is an issue,” in China, the WFA blog post reports, “as this is a market where brokering is a part of the fabric of the industry. Literally thousands of intermediaries stand between advertiser investment and consumer eyeballs, making establishing true transparency challenging to say the least.”

Japan’s low transparency score is due to the market’s wide use of rebates “and a perception from WFA members that up to 75% of these are retained by agencies rather than passed back to clients.”

Ukraine is cited for its Byzantine media-buying practices, which include “media billed after receipt of media vendor invoice” and some 21 different types of rebates that media companies offer.

France’s transparency is attributed to laws passed in the 1990s that greatly restrict rebate and discount practices. Those that are allowed must be published by vendors.

But local laws can also work against transparency, the WFA notes -- citing Brazil, where agency commissions are fixed at up to 20% and client entitlement to rebates is limited.

More mature digital media markets tend to be more transparent, and the UK, U.S. and Germany are all examples of countries at the other end of the spectrum to China and Ukraine, per the WFA. “But it’s worth noting that transparency doesn’t always equate with performance,” the group states.

In the U.S., for example, viewability is reported to be a bigger issue than transparency. “Telemetry data finds that due to the proliferation of ad networks, viewability can be lower in the U.S. than in some rapid growth markets.”

More on the index can be found here.