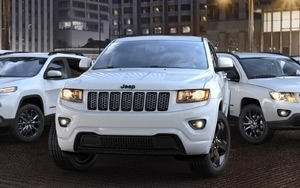 This winter from hell has put salt on the roads and a little more in the usual cuts and abrasions that makes the auto market what it is. But while February auto sales were down, the demand is not. "Storms have artificially dampened demand, and that is illustrated by the flock back to market we saw at the end of the month," said Edmunds.com Analyst Jeremy Acevedo in a press call. "Presidents Day gave the market a nice shot in the arm for the second half of the month."

Ford saw a 6% decline in total sales versus the month last year, with retail sales alone off 4%. On the bright side, it was the best February in eight years for Ford F-Series trucks, and the Lincoln brand saw a 36% increase in sales. “Sales surged in the final week, providing momentum after a slow start to the month,” said John Felice, Ford VP, U.S. marketing. “Ford Fusion continued its strong retail sales performance in the West, outpacing the mid-size sedan segment. F-Series and Lincoln also continued to perform well.”

Karl Brauer, senior analyst at Kelley Blue Book, said the "inconsistent nature of February’s numbers, with trucks, crossovers and SUVs generally doing well" shows that demand is still there. "Ford has enough new or refreshed product, either in showrooms already or soon to arrive, to suggest the automaker’s sales will lift as spring temperatures climb in the coming weeks and months.”

General Motors posted a 1% decline, but those flat sales were 30% better than January's and bucked the industry. Brauer said GM enjoyed sales across both cars and trucks, and that competitors were down between 4% and 14%. "However, with inventory levels growing and a new round of incentives in place for March GM will have to ensure a healthy sales rate going forward without compromising profitability. “

Chrysler actually got help from the hideous ice, muck, potholes, salt and snow: off-road brand Jeep, whose sales were up 47%, posted its best February ever. Jeep helped get Chrysler Group an 11% increase, the group’s best results since 2007. While Compass, Patriot, and Wrangler achieved their best-ever February numbers, the 12% increase in sales of the new Cherokee carried the brand.

Said Alec Gutierrez, senior analyst at KBB: "The Cherokee participates in the small CUV category which has been red hot in recent years and is one of the few segments expected to continue to show double-digit gains in 2014.” He also said Chrysler should see an additional boost in sales volume when their redesigned 200 shows up later this year. Sales of the Ram pickup were up 26%, thanks in part to the huge popularity of the new 1500 EcoDiesel V6 powertrain which filled its first, 8000-order allocation in three days.

Nissan also set a February record with 105,631 deliveries, an increase of 16.7% over the prior year. The automaker's gains were driven by the redesigned Rogue crossover, which in its third month of sales saw a booming 72.6% increase. Nissan Altima saw an 11.3% increase, making it the top-selling mid-size car for the month, as well, noted Acevedo. "Nissan was standout among Japanese," he said, adding that the redesigned Juke compact crossover saw a 84% year-over-year increase. Brauer said Nissan's strong customer base in the southern and coastal regions helped, but the company’s all-new Rogue is also taking full advantage of the subcompact SUV market.

Toyota’s overall sales were off 4.3% last month, but the automaker saw record February sales for the RAV4 and Highlander. "Like most large automakers, Toyota should see sales grow as temperatures rise because of [factors like] rising home values, available credit and relatively stable fuel prices," noted Brauer. Honda was off about 7% between its Acura and Honda divisions. Acura was up over a percent and Honda was down around 8%.