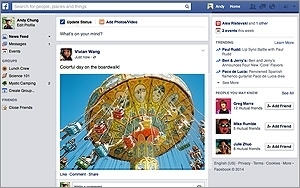 Building on its mobile–first philosophy, Facebook on Thursday said it is updating the way the News Feed looks on the desktop site to match that on mobile devices. The aim is for the social networking site to become easier to use and more consistent across platforms.

Facebook said the redesign does not affect how it surfaces content for users or how stories are ranked in the News Feed. In short, there is no algorithm change. “Though in the new design all images are larger, both organic stories and ads will be the same size -- similar to the way images appear on mobile,” stated a post on the Facebook for Business blog.

The latest facelift comes a year after Facebook began testing a major overhaul of the News Feed, aimed at bringing  more visual flair to a user’s stream of updates along with more streamlined navigation and cross-device consistency.

“People who tested it told us that they liked the bigger photos and images, but found it more difficult to navigate Facebook overall. The updated design has the best of both worlds: It keeps the layout and navigation people liked, but offers bigger images and photos, as well as a new font. The current design on mobile remains the same,” stated Facebook.

Facebook said the redesign doesn’t require marketers to do anything differently, since creative specs and image aspect ratios for ads remain the same. It also doesn’t affect how ads are bought or optimized. “You should continue to advertise based on your objectives,” the company said.

The new-look News Feed will roll out in the coming weeks on the desktop. The current design on mobile will remain the same. The move underscores how mobile has become the main screen for Facebook, which got more than half (53%) of its ad revenue from mobile ads in the fourth quarter. It had 945 million monthly active users at the end of last year