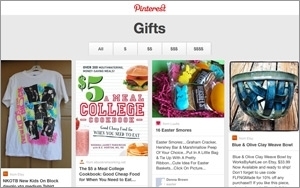 Aiming to boost e-commerce activity, Pinterest on Thursday introduced a new Gifts feed showcasing all things that users can buy through the visual social platform.

What makes this “work in progress,” as Pinterest calls it, unique from other feed categories is that it only shows Product Pins -- extra details such as pricing, availability and where an item can be purchased.

“So far, we’ve learned that Product Pins get higher click-through rates than regular Pins and make your brand more visible because of the logo on the Pin.  Pinners also get email notifications when Product Pins they’ve saved drop in price,” stated a post on Pinterest’s business blog Thursday.

The new Gifts feed also indicates price range through a system of one to four dollar signs. A single dollar sign icon, for example, means a product cost less than $25, while four means it costs more than $200. To show up in the feed, Pinterest advises brands to get Rich Pins, which allow marketers to add expanded content within a traditional pin.

Among sellers with products featured on the Gifts feed are Etsy, Bloomingdales, eBay, Revolve Clothing, Urban Outfitters, Target and Hazel & Olive. In terms of selecting what goes on the Gifts feed, a Pinterest spokesperson said the company will "determine over time what's most relevant to Pinners."

Among social properties, Pinterest has emerged as an increasingly important source of traffic to e-commerce and other sites. It ranks only behind Facebook in referred traffic and ahead of sites like Twitter and Google+, according to Shareholic, which distributes sharing widgets and monitors more traffic arriving on 200,000 sites.

Pinterest had more than 29 million unique desktop visitors in the U.S. in January, according to comScore. But its monthly mobile audience is even larger, at over 34 million, giving it an unduplicated digital audience of 55.4 million. Catering to its growing mobile audience, the company last month launched an updated mobile site.