February: The Month Of Love...And Sports

Targeting travelers was once again the most expensive way to advertise on programmatic exchanges in February, but several sports segments and holiday and event segments were expensive, as well.

The data comes from ChoiceStream’s 2014 March audience cost calendar, which looks at data from February. The company ranks the relative cost of trading between segments.

Targeting consumers looking to give gifts and celebrate baby showers were the eighth and 10th most expensive segments last month, respectively. And here I was thinking February was about making babies, not having them.

Kindling love was still in the air, though, and marketers paid for it. Reaching consumers that were actively dating or in relationships was more expensive than it ever has been 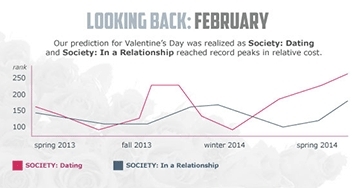 However -- and you might not want to say this to your significant other -- it seems February is actually all about sports.

Fantasy Sports was the second-most-expensive segment last month, despite the fact the NFL season was concluding and the MLB season hadn’t begun. However, the Super Bowl took place in early February, which may explain why.