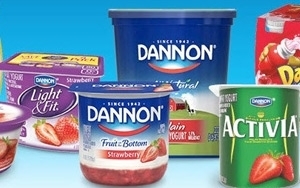 The Dannon Company has become the latest company to pledge to improve its products' nutritional profiles as a participant in The Partnership for a Healthier America (PHA).

Dannon is making the announcement at Friday's PHA summit in Washington, D.C. First Lady Michelle Obama, honorary chairwoman of PHA, which works with the private sector in initiatives aimed at ending the childhood obesity crisis, will address the group.

Dannon's commitment calls for the company -- the largest U.S. yogurt maker, with nearly 30% share of U.S. yogurt dollar sales -- to increase nutrients such as calcium and vitamin D, and decrease sugar and fat, by 2016.

Dannon will also reduce fats so that 75% of its products will be low-fat or fat-free.

To meet the goals, Dannon said it will build on learnings from last year's reformulation of its Danimals smoothies, in which the company reduced sugar by 25% while maintaining the product's taste, texture and convenience. Its new Danimals SuperStars Greek yogurt already meets the company's newly pledged nutritional criteria.

"Dannon's commitment to reduce sugar and fat in more of its products makes healthier choices even easier for millions of parents and families," said PHA CEO Lawrence A. Soler.

Dannon is also pledging to invest $3 million in nutrition education and research focused on healthy eating habits. In addition to grants to universities, the company will create educational materials, and will distribute such materials to low-income families in the government nutrition program for Women, Infants and Children (WIC), reports The Wall Street Journal.

With parents and all consumers increasingly concerned about obesity and other health issues, and the Nutrition Facts panel on foods and beverages in the process of being updated, a growing number of food makers and restaurants are making voluntary, public commitments to making their products healthier.

Other companies that have recently made PHA pledges include Subway (which pledged to limit calories and sodium and make other nutritional improvements in its children's meals) and Darden Restaurants (which will cut calories and sodium by 20% over a decade and offer more lower-calorie options).

Earlier this week, Mondelez International announced on its own (not as part of PHA) a global initiative in which, by 2020, it will reduce saturated fat and sodium in its products by 10%; increase whole grains in its products by 25%;  increase "Better Choice" products to 25% of its revenue; and increase individually wrapped options with 200 calories or fewer by 25%. It will also feature calorie information on the front of all its products, globally, by 2016.

In addition, Mondelez said it will invest $50 million in "healthy-lifestyle community partnerships" over the next several years, focused on nutrition education and promoting active lifestyles.