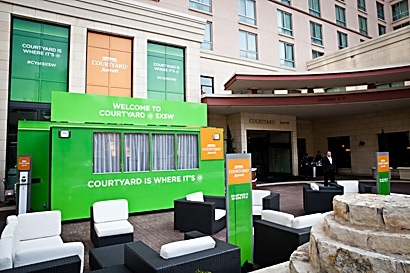 The craziness at SXSW makes having a place to unwind midday extremely valuable. Courtyard kicked off a yearlong campaign at the South by Southwest Interactive festival that allows folks to pull up a couch for an hour directly in the midst of the downtown action.

The marketing team for the "Courtyard @" experience at SXSW modeled the spaces after the Marriott hotel chain's newly designed guest rooms. Coffee, juice and a place to recharge bodies, minds and phones made it easier to carry on for the rest of the day.

The rooms were designed with the millennial business traveler in mind. Basically, the hotel chain wanted to tout its upgraded brand.

Courtyard typically builds a presence at SXSW. Its Courtyard Austin Downtown property is located across from the Convention Center. As SXSW has grown up, the brand wanted to grow its presence to service the needs of people who cannot get hotel rooms in the downtown area with the ability to kick back and recharge.

Courtyard @ offered a peek into the brand’s innovative next-generation guest room featuring its custom LoungeAround sofa and ottoman along with a tech drop. Courtyard enabled guests to reserve the space in 30-minute increments at no charge.

The company plans to take the campaign on the road and combine it with other media offerings. For example, at the same time, the hotel chain ran a Groupon discount for the Los Angeles area near the Santa Monica Pier.

Making it easier to book hotels from a mobile device, last year Google took its hotel find mobile. The desktop site launched in 2011. It provides the ability to filter search results by price, hotel class, user rating and distance. Each hotel listing page shows photos, hotel amenities, reviews and its location on a map.