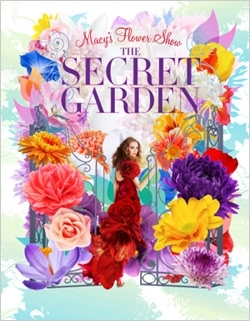 Macy’s Flower Show is always a welcome sign that winter is on its way out. But on the heels of this year’s bitter winter, the retailer’s combination of floral-themed merchandise and a strong new cause campaign makes it seem fresher than ever.

Scheduled to run from March 23 through April 6, “The Secret Garden” theme offers “a peek behind the magic and majesty of lush landscapes” and “hidden floral treasures,” the company says. It’s scheduled in five locations: Herald Square in New York, Center City in Philadelphia, State Street in Chicago, Downtown Minneapolis and Union Square in San Francisco. The event has been around since 1946, when it originated as a promotion at the cosmetics counter of Macy’s San Francisco store.

This year, dramatic 14-foot-tall wrought iron gates will welcome customers into the first garden, which is said to include a 12-foot-tall floral gown, as well as the Bouquet of the Day, one-of-a-kind centerpieces created by leading floral designers. And the two-week event is also scheduled to include the usual rotation of fashion shows, cooking demonstrations and celebrity appearances.

In Washington, D.C., the store says it will again feature the Cherry Blossom Show, with more than 30 Okame and Snow Goose Cherry Blossom trees. That event that is sponsored by HGTV Magazine and Royal Caribbean International.

This year, the flower show is designed to support the Cincinnati-based chain’s “The Secret Garden” merchandise theme, as well, with fresh, cheerful colors, spring florals, and garden-inspired merchandise across all departments. It’s also part of a new cause-related partnership with the National Recreation and Park Association.

“Spring is a time for rejuvenation, and our new Secret Garden campaign will usher in this highly anticipated season with exciting merchandise and experiences,” says Martine Reardon, Macy’s CMO, in a release explaining the new effort. “Capturing the season’s hottest trends in spring colors and patterns, Secret Garden also takes to the outdoors, supporting more than 550 of our nation’s parks and green spaces.”

Each of Macy’s 800 or so stores has selected a local park or green space in their community, and shoppers can donate $1 or more at the register, with 100% of donations going directly to that park. Macy’s is matching each donation, up to $250,000.

Of course, Macy’s isn’t the only store to dabble in flower shows, a staple of spring entertainment in malls around the country. Target’s latest A Bullseye View blog has a fun history of Dayton’s Spring Flower Show, which premiered the first of its over-the-top shows in 1960, much to the delight of its snow-weary Minneapolis customers. (Target sold its Marshall Field division to Macy’s a decade ago.)