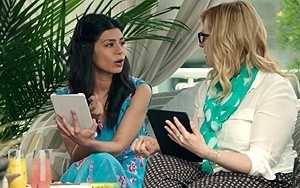 Samsung takes direct aim at the competition and their singular-function-only tablets in a new advertising campaign for its Galaxy Pro line of devices.

A new television commercial breaking Wednesday shows Galaxy Pro users working and socializing alongside users of other popular products, including Apple’s iPad, Windows tablets and Kindle e-readers. And succeeding at every turn.

“The Galaxy Note Pro and Galaxy Tab Pro are designed to meet the distinctive needs of today’s mobile consumer, whether at home, on the go or at work,” a Samsung representative tells Marketing Daily. “This campaign is meant to raise awareness about the multitude of ways that the Samsung Galaxy Note Pro and Tab Pro tablets get more done than the average device.”

The spot begins with an Apple iPad user and a Galaxy Pro user on the same side of a work video-conference call. When the boss on the other end asks to see the updated work, the Apple user is stumped, while the Galaxy user sends it immediately. “You can do that?” asks the Apple user. The scene then jumps to a crowded coffeeshop table, where a woman asks another customer to move his “laptop.” He asserts it’s a Windows 8 tablet, before others point out that it has a keyboard and a mouse. A third scenario shows a book group, where members want to look up more information. The Samsung user can access YouTube, while the Kindle user can’t.

“Samsung Galaxy products are the most innovative products on the market today,” the representative says of the approach. “We want consumers to know about the leading innovation our products offer when making purchasing decisions.”

Timed to the release of the Galaxy Note Pro and the Galaxy Tab Pro’s release into the market, the campaign will run nationally, according to the representative.