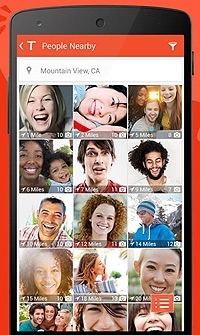 Alibaba contributed $215 million, with the balance coming from prior investors, including Access Industries, Draper Fisher Jurvetson and Yahoo co-founder Jerry Yang. That brings the total raised by the 5-year-old start-up to $367 million.

It also gives the company an estimated value of $2 billion to $3 billion.

The deal coming less than a month after Facebook’s $19 billion purchase of WhatsApp and highlights the race underway for major Internet and other companies to gain a share of the fast expanding market for mobile communication apps and services.

Unlike WhatsApp, Tango hasn’t shied away from advertising. When Twitter-owned mobile ad exchange MoPub introduced native advertising on its platform in December, it was the first company to offer native in-app inventory through MoPub. It advertisers include game developers such as Supercell, Spotify, Zynga, King, Match.com, Gameloft and GSN.

Tango, which has 160 employees, said it plans to use its latest financing to add staff in the U.S. and China as part of an ongoing effort to ramp up distribution in North America and Asia.

"The most immediate need for us is to be able to staff up and to bring to this team the best talent that we can find on the engineering front, especially in Silicon Valley, where we're competing with Google and Facebook, and in Beijing, which is as competitive as the U.S.," Tango’s chief technical officer, Eric Setton, told Mashable.