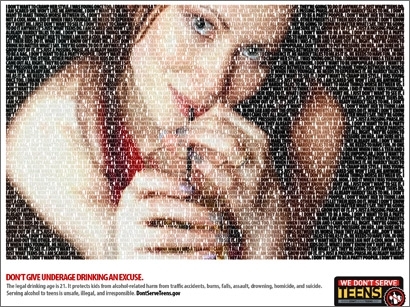 The fourth major study focused on alcohol industry compliance with self-regulatory guidelines, including those designed to address concerns about youth access to alcohol marketing.

For the study, the FTC ordered 14 major alcohol companies to provide information on advertising and marketing expenditures from the 2011 calendar year, and advertising placement data (including audience data) for the first six months of 2011.

For the first time, data obtained included substantial information on Internet and digital marketing and data collection and use practices.

The findings include how companies allocate access marketing dollars: 31.9% of expenditures were directed to advertising in traditional media such as TV, radio, magazine and newspaper.

The study found that 28.6% of expenditures were used to help wholesalers and retailers promote alcohol; 17.8% were allocated to sponsorships (sports and non-sports) and public entertainment; 7.9% were directed to online and other digital marketing (almost four times as much as the 2% reported in the 2008 study) and 6.8% were directed to outdoor and transit marketing efforts.

In the first half of 2011, 93.1% of all measured media combined (including traditional media and online/other digital) met the alcohol industry’s placement standard at the time, which required that 70% or more of the audience viewing the ads be 21 years old or older, based on reliable data.

Furthermore, because compliance shortfalls were primarily in media with smaller audiences (such as local radio), over 97% of individual consumer exposures to alcohol ads were from placements meeting the 70% standard.

The industry has since adopted a new ad placement standard requiring that 71.6% of the audience viewing alcohol ads be 21 years old or older.

In the first half of 2011, 99.5% of alcohol ads that advertisers placed on sites owned by others -- such as news, entertainment, and sports sites -- met the alcohol industry’s 70% placement standard.

The alcohol companies’ Web sites and social media pages are “age gated,” meaning that a consumer must either enter a date of birth that shows him or her to be 21 years old or older, or must certify being over 21 to enter the site.

The report’s key recommendations include that companies should take advantage of age-gating technologies offered by social media, including YouTube, and age gates on company Web sites should require consumers to enter their date of birth, rather than simply asking them to certify that they are of legal drinking age.

Companies should improve posted privacy policies to make them brief, transparent regarding data collection and use, and understandable to ordinary consumers.

Regarding user-generated content, companies should use blocking technologies and engage in frequent monitoring to reduce the potential for violations of the voluntary advertising and marketing codes established by the Beer Institute, the Distilled Spirits Council of the United States, and the Wine Institute.

The Distilled Spirits Council will give careful consideration to the recommendations in the report, says Peter Cressy, the group’s president.

“Key to our Code’s success is the willingness to adapt to the changing marketplace and new technology,” Cressy says in a statement.

Industry and others concerned with reducing underage access to alcohol are encouraged to use the free “We Don’t Serve Teens” alcohol education materials available on DontServeTeens.gov.

The FTC released previous studies in 1999, 2003, and 2008. Recommendations from past reports have resulted in agreements by the Beer Institute, the Distilled Spirits Council of the United States, and the Wine Institute, to adopt improved voluntary advertising placement standards; buying guidelines for placing ads on radio, in print, on television, and on the Internet; a requirement that suppliers conduct periodic internal audits of past placements; and systems for external review of complaints about compliance.