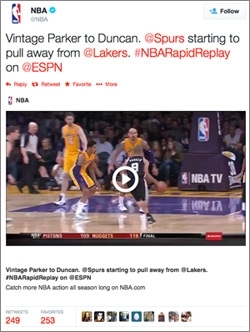 Encouraging more video views, Twitter is now letting mobile users preview clips right in their feeds and play them with one click.

“Twitter users may start to see a new video experience on Twitter,” a company spokesman said on Friday. Now, “video previews appear right in your home timeline, and you can watch the video with a single tap.”

“We’re starting this test with our Twitter Amplify partners, including the NBA, and all users can see the new experience on our mobile apps and Twitter.com.”

Merging old and new media, TV and social channels have achieved a remarkable symbiosis. According to a recent report from Digitalsmiths, nearly 29% of consumers report watching a TV show or movie because of related buzz on Facebook, Twitter and other social networks.

Social networks are doing their best to align with networks and their deep-pocketed brand partners.

In addition, Tumblr just struck a major ad partnership with Viacom. Per the exclusive deal, Tumblr plans to host content from MTV, Comedy Central and other Viacom properties, while the network will offer ad partners the option of extending their campaigns across Yahoo’s blogging platform.