76% Of Advertisers (And Rising) Use Real-Time Marketing

For those hoping “real-time marketing” would dwindle in 2014, your optimism appears to have been all for naught. Currently, 76% of marketers are using real-time marketing, and 88% consider it important to their 2014 plans.

The 76% figure might even seen low, especially when considering that 85% are using programmatic technologies to buy ads.

The data comes from a survey Evergage is expected to release on Monday. Evergage commissioned the survey in association with The Realtime Report, asking 114 digital marketers across 18 countries to share their thoughts on real-time marketing.

The phrase “real-time marketing” has been around for years, but has adopted new meaning in the past year and a half, commonly being referred to in relation to quick and witty social media interactions.

The marketers Everage surveyed agreed, with 48% saying that they carry out real-time marketing efforts on social media. However, not far behind were Web sites (45%) and email (39%). 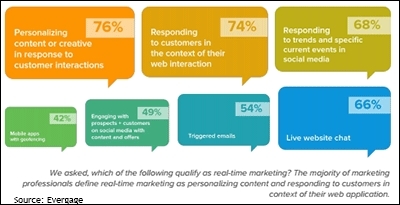 The majority (76%) of respondents believe "personalizing content or creative in response to customer interactions" is the best definition for real-time marketing, while 74% believe "responding to customers in the context of their Web interaction" qualifies. Meanwhile, 68% of respondents said "responding to trends and specific current events in social media" qualifies as real-time marketing.

When it comes to ROI, Evergage reports that the median is between 11-20%, but one-fifth of respondents said they are seeing ROI above 75% from their real-time marketing efforts.

Over one-fourth (27%) cited a lack of “access to data” as the greatest obstacle they face to implementing real-time marketing. That’s a head-scratcher; I thought “data” was modified by a “Big” (with a capital B!) for a reason.