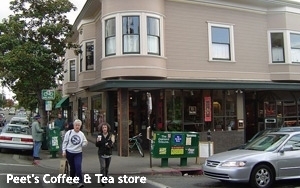 Starbucks has long made music a key part of its in-store offerings and ambience, based in part on a close relationship with Apple and iTunes. Taking a page from Starbucks, rival chain Peet's Coffee & Tea has formed a partnership with Pandora to provide customized in-store music and branded radio stations.

For Pandora, it marks the first time the company has teamed with a brick-and-mortar business to “define their sound” through a set of specialized stations. In the case of Peet’s, that includes four separate stations build around classical, jazz, folk and indie bands.

The music will play in all of the coffee company’s 230 stores nationwide. All Pandora listeners can access the new stations via its mobile and desktop apps. “In looking at the store experience holistically, we wanted to create an atmosphere that reinforced our commitment to craftsmanship in everything we do,” said Debbie Kristofferson, vice president of marketing at Peet’s, in announcing the move today.

The two companies declined to discuss the business terms of the deal, but a Pandora spokesperson said the agreement calls for the company and partner Mood Media to set up the branded stations and technology at Peet’s stores in the next month and provide customer support over the next year. The offering will rely on the current sound system in Peet’s stores; it won’t include screens or related promotion for CDs or song downloads.

Peet’s music aficionado Patrick Main will oversee curation, based in part on what’s trending, as well as more traditional selections for each of the music categories. The concept behind each station is that they’re meant to “pair well” with certain coffee varieties.

The “Melodic Indie” station, with a “contemporary, melodic sound” is supposed go well with bright and fresh blends, like Kenya Auction Lot and Café Solano Medium Roast. And if the “Origins” station is playing, that’s the cue for “rustic, earthy and vibrant” coffees, like Uzuri African Blend and Gaia Organic Blend.

In terms of promotion, each store will offer signage about the branded stations, in addition to Peet’s Web site, mobile home page in-store and its presence on Facebook and Twitter.

With 230 stores, mostly on the West Coast, Peet’s has nothing like the nationwide footprint of Starbucks' more than 7,000 stores. So any direct marketing mileage Pandora gets out the deal won’t be as widespread as Apple’s partnership with the No. 1 coffee chain.

Still, it signals that Pandora is expanding the battleground with Apple from online to the in-car listening market to stores. The rivalry with Apple’s iTunes Radio service looks to intensify with news Monday that Apple is reportedly in talks to bring National Public Radio to its iRadio service, as well as extend it to Android users.