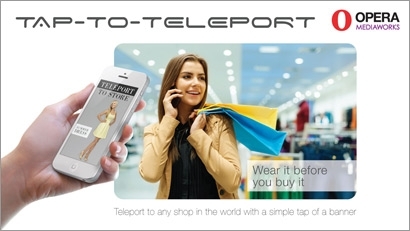 Opera Mediaworks on Tuesday unveiled a new mobile ad unit that promises to transport users instantly across space and distance for a truly immersive experience.

Taking the form of a standard mobile banner, leaderboard or medium rectangle, the Tap To Teleport ad scans the user's body to the subatomic level, then annihilates the parts at Point A and sends the scanned data to Point B to build the user back up. The company says it's a natural next step for the on-the-go consumer, especially younger ones.

“Unsurprisingly, the interaction rate on this new unit is particularly high among millennials,” noted Mediaworks CEO Mahi de Silva. The company acknowledged, however, that mainstream adoption of the format could face a hurdle because of the $1.2 million cost-per-click rate and 25-page disclaimer and terms of service consumers must accept before getting zapped.

That's an excerpt from one of what will be a stream of phony April Fools' Day press releases and announcements issued today in what has become a spirited annual tradition among tech companies. Google in particular has become known for its elaborate and expanding number of April Fool's pranks.

Last year, for example, it rolled out more than a dozen fake products including Google Nose, designed to “search for smells,” and Google SCHMICK (Simple Complete House Makeover Internet Conversion Kit). On tap this year, is Gmail “Shelfies,” a feature that lets users custom Gmail themes (of oneself) with friends.

The April Fools' stunts, however, are becoming especially hard to distinguish from actual company announcements lately. Facebook’s $2 billion acquisition of Oculus VR last week falls squarely into that category -- catching many by surprise, since the social networking giant has not made its name in consumer hardware. And how exactly is pulling on a headset and plunging into a virtual world social?

Facebook followed up the Oculus deal last week with an announcement about a plan to build drones and satellites to deliver Internet access back on Earth as part of the company's Internet.org project. For its airborne-Internet effort, the company has even brought on real live rocket scientists from NASA to staff its Facebook Connectivity Lab.

Wired reported that the initiative is similar to Google's aptly named Project Loon, which aims to provide Internet access to more remote regions through high-altitude balloons. But it more readily calls to mind Amazon's drone-powered dream to provide order delivery through a fleet of tiny self-piloting helicopters dubbed Prime Air.

Facebook clearly seems to want to join Google and Amazon in pursuing moonshot projects, but it raises the question of whether the focus is more on publicity than product development. Jeff Bezos' appearance on "60 Minutes" to discuss Prime Air was dismissed (or hailed) as a high-profile PR stunt in connection with the Super Bowl.

Google Glass has generated loads of publicity for Google, but not much business to date. It's even beyond the pale for Twitter co-founder Biz Stone. "It's kind of going crazy," he said. "I mean, computers you wear on your eyes?" he said in a Wall Street Journal interview last week, referring to products like the Google eyewear.

And that will make today's fake announcements all the more difficult to discern from the real ones. Facebook's going to have to up its game, however, if it wants to compete with Google as Silicon Valley's King of April Fools' Day.