Digital video ad platform Vindico on Thursday released its 2013 Annual Report. The focus of the report was on video ad quality, and Vindico compared ad nets and exchanges to “major media” sites and “Internet brands.”

The company considers Internet brands as “Web site brands that evolve from standalone digital content offerings,” such as MSN, Yahoo and YouTube. Major media sites are considered brands “that evolve from pre-existing traditional media outlets,” such as CNN, Hulu, NBC and the New York Times.

Vindico graded each impression it served from September through December 2013 on a scale of A-F. The company gave 3% of ad net and exchange inventory an ‘F’ and 48% of it a ‘D.’

Vindico considers a ‘D’ or ‘F’ impression as one that received “poor quality video ad treatment [and] is often below the fold and may be alongside inappropriate content." 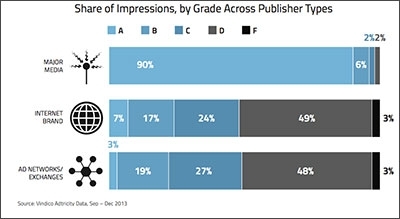 The company says 63% of online video ads on networks or exchanges were not viewable from September through December 2013.

Only 3% of ad net or exchange video ads received an ‘A’ and 19% received a ‘B’ -- grades that are reflective of “high quality video ad environment[s], imitating a TV-like experience.”

The remaining 27% of ad net and exchange inventory received a ‘C’ from Vindico. The 'C' grade represents video ads that are typically in-banner and “often cleanly executed and viewable on the page.”

Vindico grades based on viewability, content grade (was the video surrounded by respectable content?), execution (was the video fully delivered and playable?), and traffic & domain grade (how trustworthy is the site the video played on?).

A Vindico representative said: "[T]he type of ad or publisher doesn’t impact Vindico’s business at all, because they don’t own or manage any inventory. They serve ads based on what the agency’s call is.”