TubeMogul notes that inventory available for real-time bidding (RTB) from “Tier 1” publishers and comScore Top 100 sites increased by 110% and 78%, respectively, in Q1 compared to Q4. The company writes in the report that this demonstrates “that the most premium inventory channels are the fastest growing.” That is partly attributable to the fact “premium” publishers have held back from exchanges longer than others, making it easier for them to have high-growth figures on a quarter-over-quarter basis.

TubeMogul says CPMs for pre-roll inventory in the U.S. was $8.04 in Q1 2014, down just 2% from Q4 2013. Interestingly, CPMs in March exceeded CPMs in December, which TubeMogul notes is traditionally the most expensive month. March’s CPM average was $8.86, while December’s was $8.42. We have to wait for future data to see if March’s spike in cost is the start of something new or if it will ultimately become an anomaly. 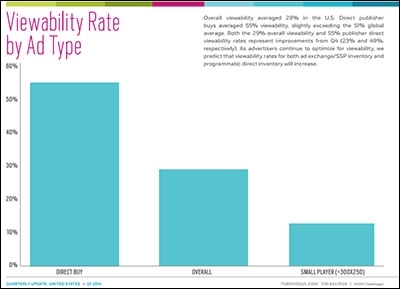 There is still plenty of room for improvement in both categories, but the industry is at least headed in the right direction -- in Q4 the viewability rates were 49% for private marketplace deals and 23% overall.