Google Stars What You Love 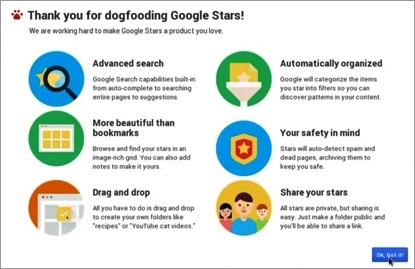 Google+ user Florian Kiersch has been experimenting with code snippets that would enable Chrome users to bookmark beyond saving pages of Web sites to revisit later. It's a feature that Google's Matt Cutts wrote about as a test in 2010. It appears that Google has found additional functions and features for the tool.

The concept highlights important information similar to the way a Gmail user might star an email. The original post from Cutts in 2010 highlights more than bookmarking features. He wrote about syncing the stars with Google Bookmarks, so users can get access to them wherever they go. Star something and it shows up above your search results.

Kiersch tells us that today's app, Google Stars, would allow users to share, save, and organize Web pages accessed through Google's Chrome browser. He shared the details in a post to Google+ users, along with video. Since the tool offers a sharing feature, it will likely integrate with Google+ and Google's search engine.

The Google Stars dashboard -- the interface that users see -- is still under development, which means that today's functions are likely limited, Kiersch wrote in the Google+ post. "The web interface for mobile does look more like a mockup than a working interface atm., which is why I didn't bother to add those screenshots here," he wrote. "Additionally, I don't have the Chrome extension for Stars, which might enhance functionality further, so the current impression is incomplete at best."

From the image it appears the features would include advanced search, save bookmark feature, drag and drop, automatic optimization, privacy settings, and the ability to share the bookmarks or stars.