The Players Championship teed off on Thursday, and with it came a new video-based ad campaign from the PGA Tour. The PGA Tour and Doner Media, the Tour’s agency, have tapped Eyeview, an online video ad platform, to run the campaign.

The campaign will rely on pre-roll video ads, which will feature live leaderboard statistics. The ads will be served via programmatic channels in an attempt to reach golf fans.

"Connecting leaderboards with video ads brings sports advertising to the next level,” said Tal Riesenfeld, co-founder of Eyeview. “What we're doing with PGA Tour is the newest development in the movement to make watching sporting events online a more holistic experience. Fans are not just seeing pre-roll ads, but those ads are fully integrated with the tournament itself."

Greg Clausen, executive vice president and chief media officer at Doner Media, told RTM Daily that the pre-roll ads will be 25 seconds long, not the traditional 15 or 30 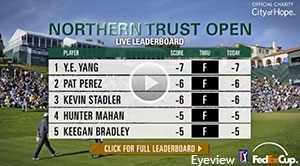 seconds. The first 20 seconds of the ad will use the Tour’s existing “These Guys are Good” campaign, while the final five seconds will show the current leaderboard, Clausen said.

Eyeview’s platform is synced with the Tour’s ShotLink technology -- which records every shot by every play in real-time -- and the leaderboard information is uploaded to the ad when the video begins.

Clausen said the Tour is using video for this campaign because they “have learned over time that video outperforms display ads for the Tour.” He said that’s true for a variety of campaigns, including campaigns meant to drive online ticket sales or campaigns meant to boost awareness and increase tune-ins.

The campaign is dayparted, meaning the pre-roll ads will only be shown when the programming is running live. This is done because the Tour is “trying to drive tune-in and digital traffic” with this campaign, per Clausen.

The Tour declined to disclose their budget for the campaign, but Ty Votaw, PGA Tour's chief global communications officer, told RTM Daily that they are “very pleased” with the success of Eyeview ads so far.

The campaign will last for the next six months. The leaderboard in the ads showcases the top five golfers. The Tour will run the campaign during “select” PGA Tour events, including but not limited to The Players Championship, World Golf Championships-Bridgestone Invitational and the Tour Championship by Coca-Cola, per the release.

A sample ad can be seen here.