The U.S. still accounts for 32% of the global RTB market (based on auction volume), and Brazil was second with just under 5% of the marketshare. The UK, Japan and France were the third, fourth and fifth leading countries by marketshare, respectively.

That represents a shift from Q4 2013. The U.S.’s marketshare and place atop the list has not changed, but Japan was second in Q4, followed by Brazil, UK and Germany.

Broken down by states here in the U.S., California dominates with just over 14% of all RTB trades. New York is second, followed by Texas, Florida and Pennsylvania. That’s the same top-five we saw in Q4 2013. 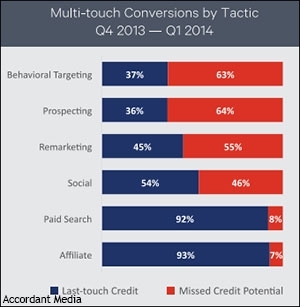 Accordant put the spotlight on attribution models in its Q1 2014 report, pitting single-touch models versus multi-touch models. The company looked at performance-based campaigns that ran in Q4 and Q1 to compare the two methods.

Accordant found that 45% of all conversions were ”exposed to more than one media touch point.” Accordant concludes that “advertisers using ‘last-touch’ attribution models thus potentially risk misunderstanding the working media supporting nearly half of their conversions.”

Muldoon reckons advertisers are recognizing this, and that last-touch attribution models are reaching the end of the line.

The company found that for behavioral targeting and prospecting, last-touch attribution can miss around 64% of the credit. For remarketing (55% missed potential credit) and social advertising (46%), it’s not much better. Only paid search (8%) and affiliate marketing (7%) were not majorly impacted by last-touch credit models.

Accordant writes in the report that the CPA went down when using multi-touch attribution (except for in social) because affiliate and paid search tactics were over-credited with conversions.