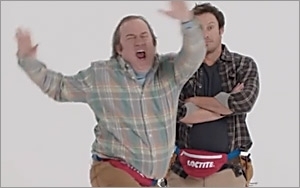 No product category is safe from advertising cliches. The proof is in the glue: if even adhesives have their standard pitch, then nothing is safe. Exhibit one is the famous ads of people using super adhesive to do incredible things one would probably never try on one’s own, and that most people probably doubt are even possible; like hanging by a helmet from a football goalpost, thanks to one drop of über glue.

One brand in the fast-drying super-adhesive category is taking a different tack, so to speak. Bridgewater, N.J.-based Henkel Corp.’s Loctite is going with an emotional pitch around the idea that glue can fulfill you. Or at least make you dance. And make you talk: besides traditional elements, there's a social media program. The effort is the first work for the brand by Minneapolis-based Fallon Worldwide, which Loctite tapped as AOR late last year.

The effort starts with a national TV spot airing on major sports, season finales, and late-night and syndication, per Fallon. The ad deliberately, almost mockingly, avoids saying anything whatsoever about the product. No voiceover, not even any product shots. Just people dancing to hip hop against a white background while wearing red fanny packs with the Loctite logo. Contractors dance with hipster businessmen, kids dance with moms, people form a dance line.

The agency said in a statement about the campaign that the goal is to "Spark dialogue about Loctite Super Glue," and change the conversation in the category, "A conversation that has traditionally been focused on outsized claims, crazy feats and consumer failure."

“Traditional glue ads tend to show what a glue is capable of. Our campaign steers away from that category norm to celebrate what Loctite users are capable of with Loctite on their side. When you use Loctite, you enter into a World of Win,” said Pierre Tannoux, marketing director of Loctite consumer adhesives, in a statement.

The agency says the work will launch in waves over the next six months, including digital and point-of-purchase: national retail, hardware and home improvement stores.  The social part of the campaign on Twitter and Youtube aims to crowdsource consumer super glue victories at #winatglue.