Are you a Shutterfly email subscriber who received the online photo service's errant "Congratulations on your new arrival!" email in your inbox recently? 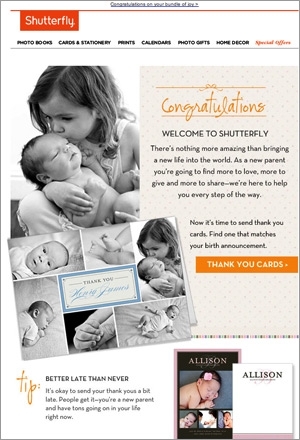 Maybe you shrugged, laughed, deleted the email or did all three. Or, like hundreds of other recipients, you took to Twitter or Facebook to tease or scold the company on its misfired message.

Errant emails like Shutterfly's are almost inevitable in email marketing. Your mistake might not generate the same social and news media heat, but you should be ready for anything and have steps to manage it in your disaster-preparation plan.

(Don't have one? See my 13-step guide in this 2010 Email Insider column: "Saying 'I'm Sorry': Keys To An Effective Email Correction Process.")

On the positive side, Shutterfly's very public mistake and subsequent response shows other marketers how to manage a high-profile email snafu:

1. Quick response: The company responded relatively soon after the errant email went out, first with a comment and apology on Twitter, followed several hours later by an apology email. 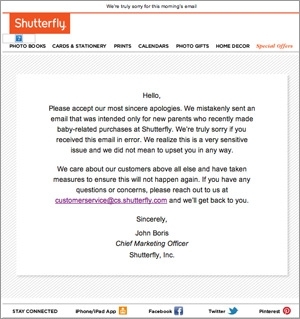 While the social media team apparently didn't jump on the problem as soon as it began to light up Twitter, its Twitter timestamp shows the Tweet went out presumably close to the start of the West Coast social media team’s workday.

Shutterfly then sent its apology email several hours later, but the same day, which was commendable. Perhaps it could have been sent earlier, but that's not always possible. You need time to figure out what happened, who was affected and how to fix it, as well as time to draft and fine-tune the apology email. This can be challenging, especially when executives are involved who may be traveling, in meetings or on vacation.

2. Straightforward explanation: In the apology email, Shutterfly CMO John Boris did not offer a lengthy technical recap about how the mistake happened, nor did he assign blame.

Instead, he explained that the message was intended for "new parents who recently made baby-related purchases at Shutterfly,” and assured customers that the company "[has] taken measures to ensure this will not happen again." Customers care about those points, not the details.

With this sentence, “We realize this is a very sensitive issue and we did not mean to upset you in any way,” Boris also acknowledged that congratulations on a new baby could upset or offend recipients who might have suffered miscarriages or infertility.

The message directed comments and questions to the company's customer service email address. That is the best approach, using the same channel as the mistake.

3. Public signature: Signing Boris' name on the message added legitimacy and was more appropriate than spotlighting the CEO or a customer-service bigwig, because it was a marketing mistake.

4. Stripped-down, mobile-friendly format: As the screenshot shows, the apology email used short sentences in plain language, with no artwork other than the company logo at top and the social media icons on the bottom.

I liked the preheader, "We're truly sorry for this morning's email," and the simple format, which presumably would render well across multiple screen sizes and formats.

Tip: Review your template for suitability. Would you be able to use it to send out an apology or other sensitive or breaking news? Look for elements that would be inadvertently offensive, like aggressively worded promotions or slogans. Create a stripped-down, mobile-friendly version that you could substitute as needed.

5. Omnichannel approach: Shutterfly's response across channels shows the importance of integrating your communication channels. Acknowledging an error first in social media gets the word out quickly and manages the situation ahead of complaints.

It also buys you time to figure out the problem and craft a more thorough email response.

Got an Email Disaster Plan?

Like a fire drill, it details the steps to take when responding to an email mistake that could grow into a disaster. Without one, you could lose valuable response time to confusion and wasted efforts.

Until next time, take it up a notch.