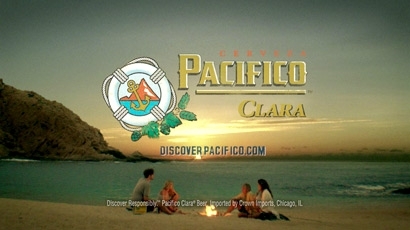 In a new effort launching this week, the brand is using its bottles’ iconic yellow caps as a point of connection with consumers. The brand is printing GPS coordinates on the underside of these caps, encouraging consumers to enter those coordinates at a dedicated Web site that will show off unique adventures that can be had in those areas. Among the possible adventures showcased: spearfishing in Santa Maria Bay, surfing in Scorpion Bay or camping on the beach.

In all, the campaign from agency GSD&M will showcase 21 spots throughout Baja, mainland Mexico and along the Pacific Coast of the U.S., via 120 million printed bottle caps, marking the largest campaign reach the brand has ever undertaken, says Jim Sabia, chief marketing officer for beer brands at Pacifico parent, Constellation Brands.

“The brand was discovered in the Baja years ago by the American surfers who went down there. This part of Mexico is important to the brand,” Sabia tells Marketing Daily. “[The videos] really embody the fun spirit of the brand.”

Pacifico will be be promoting the effort with three television commercials (which will also run in digital channels nationally), print and out-of-home advertising, and point-of-sale promotions, encouraging consumers to “Uncap Pacifico.” One of the television commercials, which begins airing on Monday, shows a group of young men and women heading to a bottle cap’s coordinates, where they go spearfishing and enjoy a beach cookout with the day’s catch (and Pacifico beer). A voiceover notes the beer was “discovered in Baja, [and] enjoyed everywhere under the sun.”

“It’s amazing the places down there that people have never heard about,” Sabia says, noting that he fully expects people to follow the GPS coordinates in the real world for their own adventures as well. “There’s all those locations that capture the spirit of who we are.”